Bringing color to the realm

July 15, 2019
So with the Trident Realm being the newest warband, I figured it would be a good one to have available at Gencon.  However I didn't think it would happen, as I expected it would take two more weeks to arrive from the UK (and I doubt I could get it done in the few days before I leave the week of Gencon.

Then Mantic pleasantly surprised me - and they showed up after only five days (and beyond that, shipped early), so they came in last week.

I went with the GW contrast paints for most things, and that meant I pretty much finished this in less than a day. 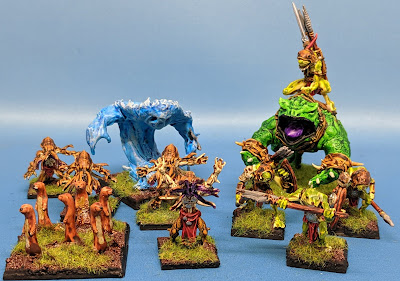 I went back and forth several times on what to take for command here - they have four command models - more than any other.  Eventually I went with the Mythican Aquamage - and command version of the standard Thuul Mythican - so both a spellcaster and command. 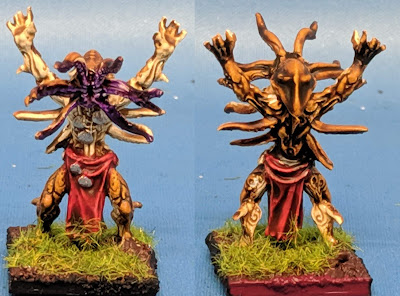 He has a special rule "Elemental Mastery" - which allows a warband with him to take an additional Water Elemental beyond the normal limits for Large models. 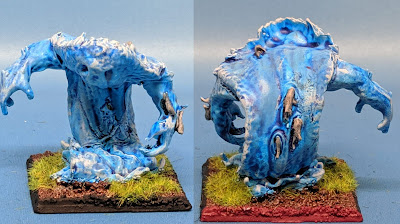 Of course I HAD to take a Dambuster - though which one.  There is only 10 points difference betwene them - but that 10 points is an extra grunt model.  So I decided to go with the standard version.  You don't get very inspiring for riverguard nor the extra white command die, but you still get the awesome model. 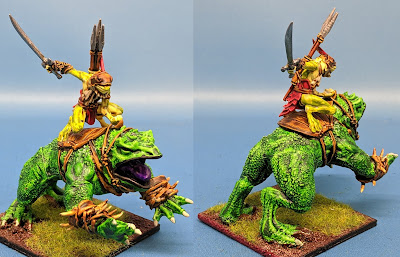 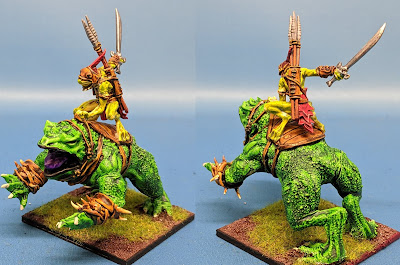 It only made sense then that I take some riverguard models as well.  So a couple of standard warriors, and a treeleaper in support (I love his specialrule is "Death from Above"

With only two warriors I needed more.  Since I had a Mythican, some Thuul seemed appropriate.  I had a couple models left over my my recent Trident Realm of Rl'yeh army, I figured I'd fill out the warband with three Thuuls (hitting on 3's is nice)

That left me 10 points - just enough for a grunt to up my model count to 10.  There are two choices - and since I had already taken Niaads in my Forces of Nature warband I felt it would be better not to duplicate the models - so otter bevy it was.  Digging in my bits box I pulled out a bunch of otters from the Naiad sprues I had used for Kings of War and made a swarm of otters.

So now the forces of Neritica are ready for Gencon (which makes 12 painted warbands now!)  (No, I haven't gotten around to posting up the Elves and Orcs - those are coming).

Of course I am still going to finish off the Abyssal Dwarfs so I'll have 13 available for players to choose from.