It is just their nature

July 01, 2019
The next warband on my painting table as I feverishly get ready for Gencon (which is not only a month away) is the Forces of Nature. 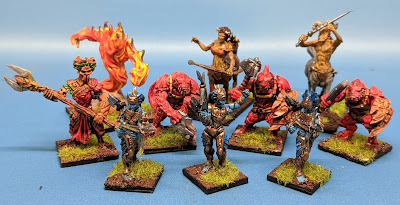 I thought I would try some of the GW contrast paints on these a bit.

First up for a command model I picked the Gladewalker Druid, as it takes care of both command and spellcaster slots (plus the dungeon saga model is nice).  The straps and stone ends of the spear were traditional paints, while the rest is GW contrast (not including the base) 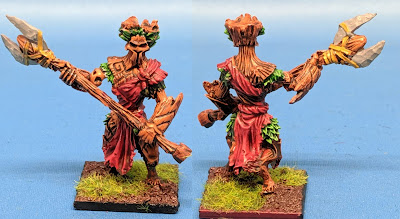 Next I needed some grunts - so Salamander Unblooded models.  The one advantage is that even though they are grunts (so they don't get a nerve check to not die), they do have two wounds and CS(1). 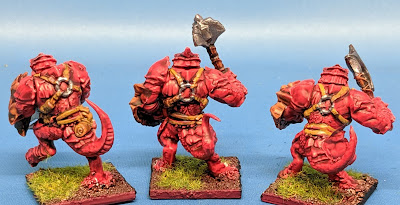 Still needing some warriors, I picked three Naiads with harpoon guns.  I actually had a troop of these from my original nature army that I was no longer using, so I rebased them onto single bases. 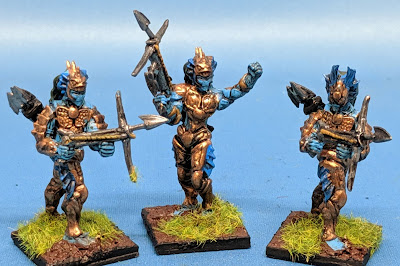 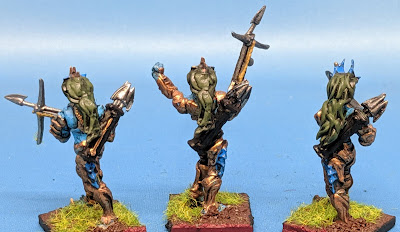 I originally wanted to have two Centaur Bray Hunter, but when I got the reinforcement pack with the two centaurs, there was only one bow.  So I made a Strider and a Hunter. 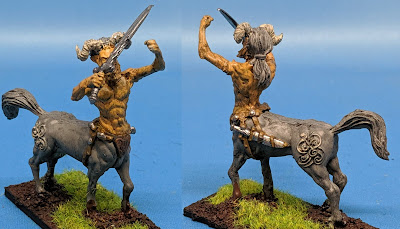 Lastly, to fill out my large slot was a fire elemental. I don't yet have a water elemental model (which I liked a bit better for the price), so I went with this one (which also has a shooting attack and a Red command die) 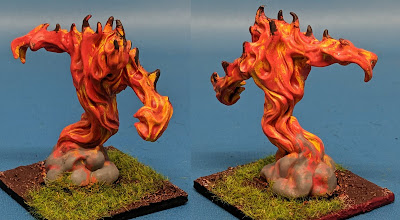 As for using the contrast paints, they are saving me a little bit of time (I managed to finish up the Ogres, Undead and Orcs all this past weekend), but trying to do a model just using them is limiting because I only have a few (and I'm not going to go out and buy 30+ paints at almost $8 a piece).  You still have the problem in that they don't cover each other well, so to truly correct any over-painting you have to go back to white on that spot.

I also don't care for the white undercoat - if for no other reason than missing a tiny spot shows up (of course not until AFTER you have declared the model done).