On Saturday December 3rd, we held the 7th Gem City Massacre - once again at Epic Loot Games in Centerville OH.  This year we filled the store with 16 players, a fantastic turnout.  This was our capacity, though the store did give us two more tables (Friday night we had 18 players) but we had a total of three people having to drop due to illness.

We had three players come up from northern Kentucky who were a little late, so we got started a bit late.  Once everyone was there Round 1 started. 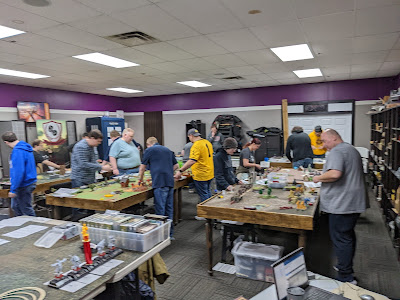 The Ohio War Kings provided pizza for lunch, as well as trophies and door prizes.  Mantic Games gave us gift codes for the winners as well. 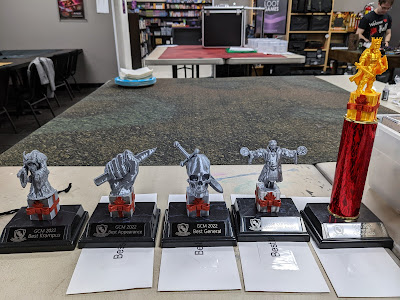 Also during lunch all the armies were on display for appearance judging, favorite army voting, and favorite special character.


In addition, each player brought a special character - Kringle for good armies, Krampus for evil (and neutral picked).  They all had the same profile, and all had specific tournament objectives.

So after much pizza was consumed and the armies were weighed, measured (and hopefully not found wanting), everyone picked their favorites and round 2 started up! 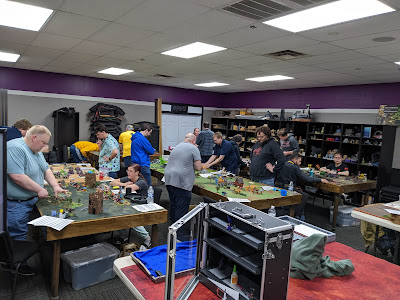 We took a small break, and then got started on the final round. 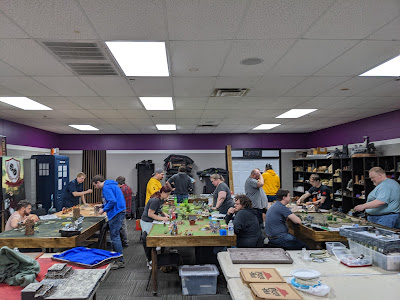 And that wrapped it up.  We actually had two players go 3-0 (which can happen with only 3 games and 16 players), but scenario and attrition points gave us clear (but close) winners.

Full tournament results are at Gem City Massacre 2022, along with round results.
We tried testing the Mantic Companion Tournament software again - however it has not been updated since War Kings, so we will have to wait for the Elliot to be able to do updates.
It was a great time, and I think everyone had fun.  We hope to have room for more next year!
Because it is all fun and games . . .