What do you get? 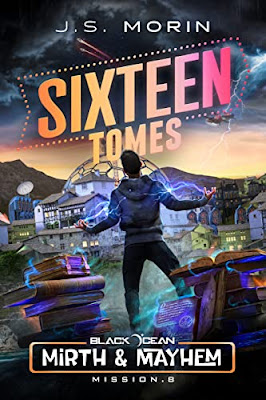 So we have the penultimate chapter in the second mission pack for the adventures Mort, Chuck and the young Brad.  This one takes off directly after the previous book, with Mort in hot pursuit, though one he isn't quite as sure about as normal.  Chuck is there to basically give him a ride.

Meanwhile, Brad is stuck on a colony that tries to imitate an idealism time gone by that never truly was, but for him it is nothing but boring.

This book spent a bit more time deep diving into some of the characters, helping to flesh them out even more, and show us more of who they will eventually be.   The merciless wizard assassin who is finding out just when mercy is important.  A teenager valuing family over rules, and finding some surprising depth not only in himself, but also in the music that we is just beginning to actually LISTEN to and understand.

Of course, the cinematic touches are there, though there is much less action to be had in this volume.  It definitely is showing Brad growing up and starting to get out on his own - which I'm hoping will soon (in the next mission pack perhaps) lead to him finally going to the academy and starting to meet some of the other characters that will be so important later in his life.

Here is hoping the next book will continue to improve, so we can get to the more interesting backstory with these characters that has been hinted at and referenced in the other series.

Mirth & Mayhem Mission 8: Sixteen Tomes is available here.
Because it is all fun and games . . .
#BlackOcean #JSMorin #Mirth&Mayhem #review #SixteenTomes