Rise of the Celestians 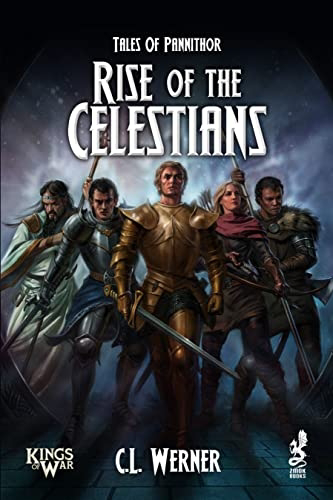 This is the book for all those people who have been complaining that Kings of War from Mantic Games (and it's related games) does not have enough backstory for their gaming world. Now we have a rich telling of how the fabled Celestians came to the world of Pannithor, and what they did, and the effects they had.
If you have read the back stories in the rule books, you will be familiar with many of the names of the Celestial - Valendor, Oskan, Kyros and some you will be familiar with by their more 'modern' names, such as the green lady. It also shows how they have changed the world from the old gods you may also have heard of, such as Shobik and Khorgan, filling in the story of these old gods as well.
The book does start a bit slow, but the pace starts to pick up until I didn't want to put it down, and I'm really looking forward to more.
I generally prefer character driven stories, so you can see how the events affect the people in the book. This is much more event driven, with most chapters dealing with a significant event in the three hundred years that the book covers. It doesn't go very deeply into any of the characters, though Oskan is probably given more time than any of the other celestians. This does succeed though in making him a much more interesting character than presented in any of the other bits of backstory in the rule books (enough that I want more of his story specifically.)
While not a cliffhanger, the book does end with just a tease of what is to come (no surprise if you are familiar with the lore), but just enough for me to want to know the continued backstory of the next major period in the history of Pannithor.
I have honestly never been a big fan of licensed books, and most game backgrounds, especially for Games that come from a Workshop, but so far the Tales of Pannithor and Tales of Mantica novels have all been very enjoyable, and I would highly recommend them.
Rise of the Celestians is available at Zmok Books and Amazon.
Because it is all fun and games . . .
#KingsofWar #mantica #ManticGames #pannithor #review #RiseOfTheCelestians #zmokbooks