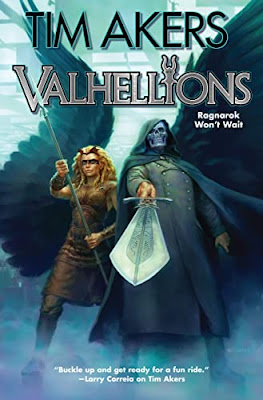 March see the long awaited (at least by me) new novel in the NightWatch series by Tim Akers.

Once again we join John Rast and his band of heroes as they work to save our world from the mythical creatures that share it, but that we just don't notice.  Going from the patrolling renaissance fairs and cosplay conventions to Valhalla (or it is Minnesota?) they will encounter necromancers, Valkyries and hordes of undead nazis in their quest to prevent Ragnarok.

John is still the 'new guy' on the team, who seems to get by more on luck than skill.  Rather than the heroic knight, his role is the warden - protecting the more vulnerable members of the team while allowing them use their abilities to take down the monsters they encounter.  He never seems to get the proper credit for anything he does (including killing a dragon).  His former girlfriend Chesa, on the other hand, has easily slipped into the role of an elvish ranger princess.  Part of his role would appear to be comic relief, or simply the 'everyman' that the reader can identify with, so even though he saves the day multiple times, he still never quite seems to be accepted as the major part of the team that he is.

Much like the first novel, this one is full of great lines and humorous situations, while still giving a sense of menace and threat as the danger increases.  I found myself chuckling from the first page onward (much to my wife's chagrin as I insisted on quoting lines to her while she was stuck in the airplane seat next to me, unable to get away).

The book does a good job of starting to growing some of the other characters as well, in a very natural way that fills in major parts of their backstory with their lives in the mundane world (while still leaving others to explore later).   These pieces flowed naturally, seeming to be an effortless part of the story (which in itself shows how much effort actually goes into the writing of the book).

The descriptions and characterizations give a very cinematic feel to the story, and it would make for a great streaming series.

Much more than just a mash up of men in black and cosplay, you actually start to care about the characters,  And like many great books, this leaves you both satisfied and wanting more.

Overall a fun and exciting ride with plenty of laughs and excitement along the way.  I truly am looking forward to the next installment of this series.

It is available at amazon or ask for it at your local bookstore.