From under to over

Fans of Mantic Games know that the company prides itself on great customer service, not only by rapidly fixing any issues that players have with product, but by actually LISTENING to the players and fans of their games.  The fans themselves make up the official rules committees for their games, so updates, rulings and new versions aren't based on what can sell, but what the game needs and community wants to move forward.

Occasionally the feedback they receive is, well let's just say less than positive.  When they first announced the new fliers for the dwarf fleet in Armada, their fantasy naval game - the reaction was overwhelming.  Overwhelming negative that is.  The Caged Gun Wyrm and Armoured Mountain Wyrm were flying monstrosities that most players felt might fit the Abyssal Dwarfs, but not the 'normal' good aligned dwarfs.

Mantic heard the feedback, and pulled them from production, to replaces them something more fitting for their ideas of dwarfs.  (I agreed with this - at no point do Mantic dwarfs have wyrms (or any kind of dragon) nor any kind of enslaved creatures (they do have constructs however)).

And the new fliers are now available!!! 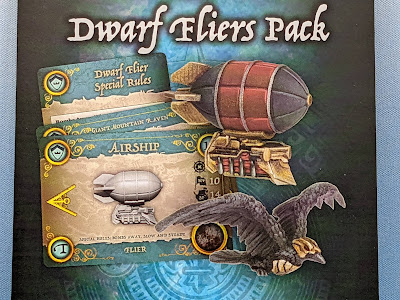 Like all flier packs, these come with two models, two cards for those models, and a card with new special rules for them. 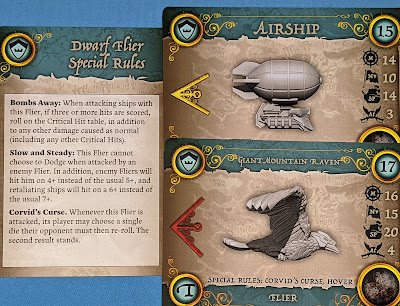 The first of these is a classic airship - a small zeppelin if you will. A big balloon with an undercarriage that carries warriors who can drop bombs on the ships they fly over, but is not very fast or maneuverable, and easier during it's attack runs. 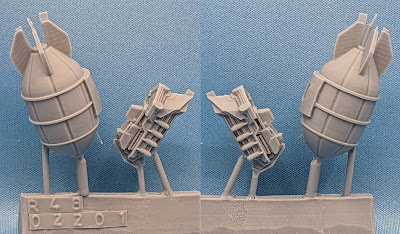 The other flier is a giant mountain raven - a huge bird that is close to the opposite of the airship.  Faster, more maneuverable, and harder to hit, it makes for an interesting alternative.

This now makes fliers for all the fleets that Mantic makes models for.  However there is one fleet that still exists (with cards) that does not yet have flying models.  You can buy the cards from Warlord Games (and the ships are based on their Black Seas ships (the game which Armada itself is based on).  However Warlord does not make flying models for Black Seas, so why doesn't Mantic make the single blister pack of fliers for the Kingdoms of Men?