They never told you the price that you pay 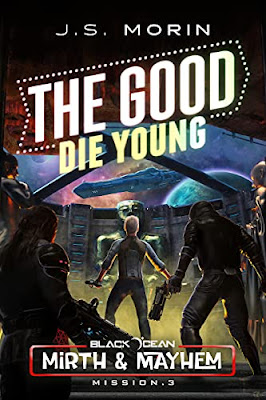 The third mission in the Mirth & Mayhem series finds our favorite family plus wizard on a ship full of religious pilgrims, headed to spread the word of the one church throughout the galaxy.  No, they aren't converts, they are entertainment hired to show earth culture to the other races.  Of course things never go smoothly in the Black Ocean, and pirates soon capture the ship.  (Why?  Well we all know that Everything's better with pirates!  (and you must be a HUGE geek to get know that obscure movie quote)).
Mort is still struggling with the overwhelming power he has, and the fact that he actually cares for the Ramses, which is an interesting character arc to see.  The teen-aged Carl is, as would be expected of any fourteen year old boy, much more concerned with getting to know the cute girls on board the ship, while his father Chuck simply wants to do his comedy show.
The plot feels a bit more forced than most of the Black Ocean books, which is most likely due to this being a prequel series - we all know where the characters are going to end up after all.   Plus seeing them Carl this young doesn't seem to be going anywhere.  I'd be more interested in seeing how he meets some of the other characters we will later know, and early adventures with them.
As always, the writing is quite good, and the cinematic feel continues as well.  I still feel that these would make for a great tv series.
Because it is all fun and games . . .
#BlackOcean #JSMorin #Mirth&Mayhem #review #TheGoodDieYoung