You've got to know when to hold em 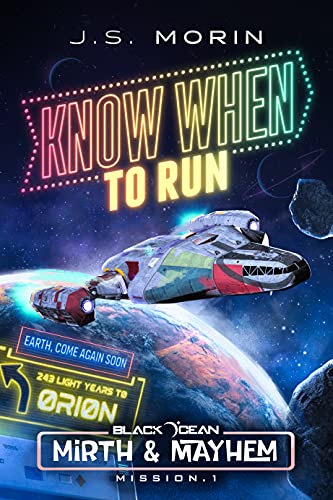 So how did our favorite characters become who they are?  Now is your chance to find out in the new Black Ocean prequel series, Mirth & Mayhem.  Prequels seem to be very popular lately (and we won't mention a certain trilogy) as they give us a chance to dig deep into what makes the characters tick and where they came from.

So just how did Mordecai the Brown become the most wanted wizard in the known galaxy, and why is he traveling with Carl Ramsey of all people.  Now we have a chance to see how these two characters meet and become life long friends, and what is behind it all.

Once again Morin's cinematic style puts us right into the scenes, as we see younger versions of the heroes of the Galaxy Outlaws series.  Like his other series, this feels more like watching a great sci-fi show than reading a novel, with each book being another episode.  Even though you may already know where everyone eventually ends up, it is a fun ride to see how they got started.  It gives us a chance to see some of the reasons why things happened, often expanding on throwaway lines from other books.

If you are new to the whole Black Ocean, then this may be an interesting place to jump on.  Often it can be difficult to get into a series with a large number of books because of all of the back story that comes with it - but this is the backstory.  There are nice callbacks if you have read the previous series, but they are presented without fanfare, so new readers may not get them, but also won't miss them (until they get addicted to this series and pick up all of them, getting the 'aha' moment later when they can see how some small event led to something much bigger later.

The pacing is a little slower than some of the other books, and being the first in a new series it can make a bit of sense that it is still finding the exact rhythm for the series.

A solid, enjoyable read, leaving you wanting more, to see what happens next (and for long time readers - just how are other characters and situations going to be introduced?)