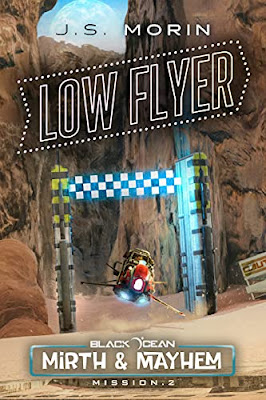 The second volume of the new Black Ocean series, Mirth & Mayhem has arrived.

Just like the Mercy for Hire series, Morin's new series names the books after music puns.  Beyond that, this is another good read for fans of the Black Ocean.  We continue to see the early adventures of Mort and the hijinks that Brad Ramsey gets into as a kid - definite precursors to what will become his life later on.  His father Chuck is much more prominently featured in the series (for on because Brad is still only 12).

It is a hallmark of the not just this series, but the entire series of series that is the Black Ocean for its cinematic feel, and this continues in that tradition.  Everything is well described, but not overdone, so you feel like you are watching it, not reading it.

The stories here are smaller, but so is the subject matter, so it fits.  Very well paced so that it keeps you pulled into the story without feeling rushed as we follow the three characters on their visit 'home'.  The racing sequence was also a nice twist, and was not what I expected (and feared, for those who have bad memories the Phantom Menace and it's podracing).

The larger plot line is getting built that I expect will run through the entire series (though my expectations have often been wrong with Morin's work) and is a second thread (beyond the entire 'coming of age' theme) tying this series together.

So how long do I have to wait for the next one?

Buy the book on Amazon