How could you sleep through the Apocalypse?

I remember when my kids were teenagers, saying they slept so hard they could sleep through a bomb going off and not even flinch.  So what happens when you actually sleep through the apocalypse? 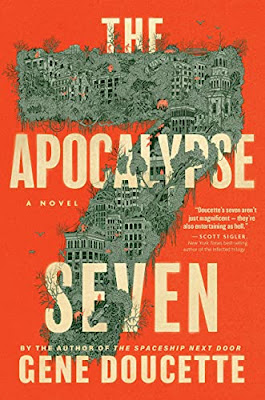 Gene Doucette's latest mass market book (as opposed to his self-published ones), The Apocalypse Seven is that exact premise.  Seven strangers each wake up alone to find they have missed the end of the world, and are, it seems, the only person left on earth.  As they struggle first to survive, and then to find any other survivors., the mystery of what happened to everyone and everything deepens into an interesting twist of a climax.
This isn't as much a story about the end of the world (as they all missed it), but more the characters that are left.  Telling the story from seven different viewpoints helps to you to see more of what is behind each of these random people, though some people might be thrown off by switching viewpoints every chapter.
Stories of the apocalypse seem to be a popular genre, but this is a different take on that.  It isn't about HOW the characters survive the end of the world, but what happens to the AFTER the end of the world.  Everything is already gone when the book begins.  Whatever ended the world is over and done with, and nature is recovering.

There actually end up being some very interesting philosophical questions brought up as the shock wears off and they begin to discover more of what happened.  It actually plays with some of my favorite tropes (though I won't reveal what those are).

The writing is clear and entertaining, telling a very interesting story in a slightly different way.  Doucette does a very good job of making each character (and their corresponding view point) different and unique, realized with hopes, fears and dreams.  I also like that it avoids the tired trope of setting up a big bad wolf (or wolf-descendants in this case) as the big monsters but revealing that people are instead the monsters.   Or maybe when you only have seven people left (much like Gilligan's Island) there just isn't a place for the worst parts to come out.

As much as I'd like to read more about the characters and this brave new world they are in, it is actually nice in this age eternal on going serialized storytelling to have the entire story in one go.  A very enjoyable read, and while I can't say that I want to read the next one (as there is no next one), I do look forward to his next book.