And so it really began 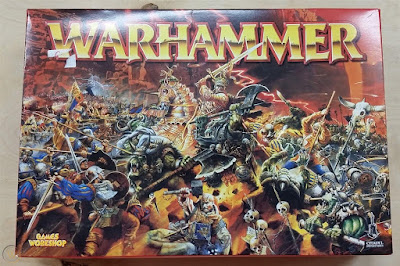 Like so many others, I started wargaming with Warhammer Fantasy Battles.  Unlike most it seems, I did not not start as a kid, but got into it fairly late as an adult.

After seeing cool minis at conventions (Origins and Gencon), I decided to bite the bullet and buy the game.  I did not realize that this edition (6th) had just come out a few months before.  I really liked the Orcs & Goblins, but the one other person I knew who played the game played them, so I picked another army (not realizing that many people can play the same army without it ever being the same).

I picked Vampire Counts as my first army - again not realizing they had just gotten a new revamp (6th edition was a major rewrite of the game, and everyone was starting from a set of 'get you by' lists until their books would eventually come out.  The box set contained Empire and Orcs & Goblins, and they were the first army books to be released.   Vampire Counts was the third.

I will admit, I was very intimidated to try to paint an army - but I had painted skeletons before and knew I could do them, so undead it was.

Of course, I didn't like the standard build with very powerful vampire characters - so I went with an army that had no vampires and was instead led by necromancers.  I lost a lot of games.  Eventually I decided to do a second army, this time goblins.  Feeling like my skills as a general sucked, I decided to make an army as random as I could - so squigs and fanatics.  I added some magic and war machines, and thought of two possible themes - either a circus or the concept of "going postal" - the postal theme won (and I eventually saw at least a couple of great goblin circus armies, so I think it was a good decision).

I eventually gave all my VC stuff to my son, who at some point actually sold some to his friends (I remember playing a game once and recognizing my old models that I was playing against).

So as much as I eventually grew to dislike Games Workshop, they are responsible for getting me into the hobby that I enjoy so much now.

Because it is all fun and games . . .
#GrowTheHobby #Models #Warhammer