For the love of Evil

November 21, 2019
It makes me wonder sometimes why there are as many evil armies in Kings of War as there are Good and Neutral COMBINED.  Does that say something about the designers or the players?  Or are the bad guys just more interesting?

Regardless, it is time to look at how I converted more of my 1000 pt demo armies to 3rd edition. 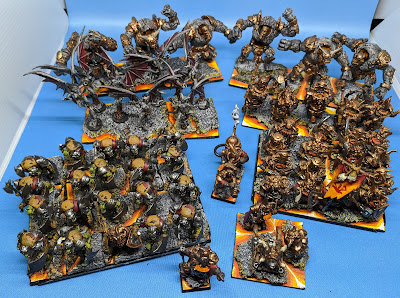 
Abyssal Dwarfs were my first Kings of War army - and I've taken some out and used them only for demos (which is why they have volcanic bases - I just didn't feel like rebasing them all).

Once again I ran into issues with unlocks - as I only had 1, but two heroes and a war engine.  This was solved by simply combining the two regiments of LOGs into a horde.  Of course I had to add in the new Charnox option to them, so the points there was almost a wash.  I did need a few more points, so I swapped out the mortar for a rocket launcher.  Overall very similar. 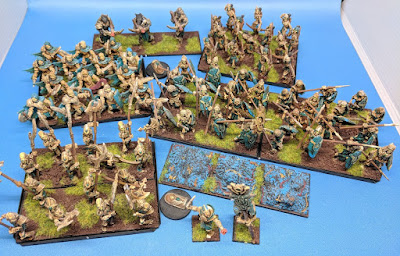 This is the one list that I did not have to change - it basically converted over without any issues.  Basically for everything that increased in cost, another unit decreased in cost.  So really, nothing to be done here. 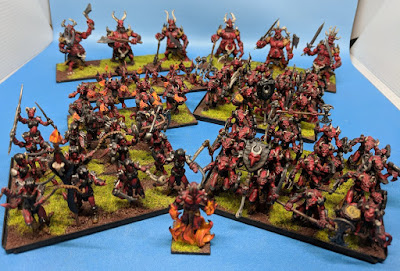 Forces of the Abyss

The Forces of the Abyss was another list that did not have inspiring - so I needed to add something in with it.  The easiest way was to drop a regiment of Molochs and add in and Abyssal Champion.  I had an extra Drech'Nok from the Dungeon Saga "Infernal Crypts" expansion - so I figured he would make a good Abyssal Champion (since I had already used my Abyssal Champion for Vanguard).  I did have to break my rule on items and give him wings (since the model has them). 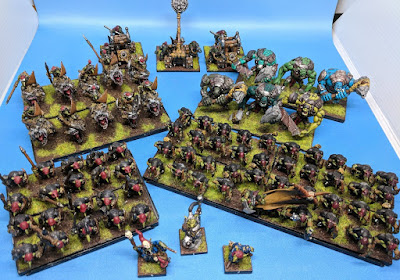 I had to rework my goblins with CoK 19 (and the picture is the army BEFORE then), and once again I was short unlocks.  So combining the two troll regiments into a horde basically took care of that, and gave me the extra points to account for the point changed in the list.  So no new models, just an additional movement tray.

Next time is the last three armies (until Uncharted Empires comes out - and I see how the lists I have in there will convert: