By all that's holy

March 28, 2019
Ever since the Kings of War 2nd edition kickstarter back in 2014, fans of the Hegemony of Basilea have waited for the re-release of their army.  The original army came out from the first edition kickstarter back in 2012, and the second saw some exciting new models funded, including a dragon, war wizard and the Heavy Arbalest.  The dragon eventually came out however, but still no arbalast or wizard unless you got them through the kickstarter.

Then we got the Vanguard kickstarter, and a bunch of new Basilean models for it.  But now, finally, the new army box is coming in June! 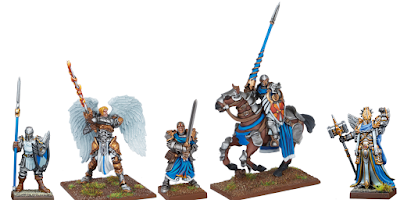 Basilean Army, MGKWB108, £59.99/€79.99/$89.99
The pious warriors of Basilea march to war with the power of the gods at their backs. Angelic Elohi soar high above the battlefield, while the warrior-monks of the Paladins use their divine magic to heal the wounded and smite the wicked.
Contents:


This is six sprues of the new hard plastic men-at-arms and the new resin Dictator model from Vanguard.  The Elohi and knights are the existing models. 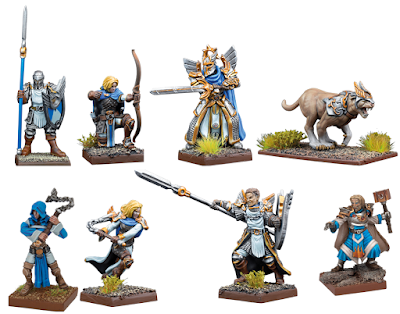 Basilean Mega Army, MGKWB109, £99.99/€129.99/$149.99
Basilea’s wealth means that its footsoldiers marches to war clad in the finest plate and bearing the very best weapons that money can buy. Vast armies of them march to protect its borders, bolstered by the elite religious warriors of the paladins on foot and atop mighty warhorses, and the fanatical sisterhood.
Contents:


So again six sprues of the hard plastic Men@Arms, but now 10 of each of the new Sisterhood Scouts, Paladin Defenders, Gur Panthers, Men@Arms command and Sisterhood.  Plus 10 of the older sisterhood.  Why so many of some of these - like the Men@Arms command?  Because when they were being made for Vanguard, the army was mixed up on the PVC sprues (as small as they were) which held the heads / arms etc.  So there is no way to actually separate these.

What this really ends up being is 5 Vanguard starter sets, plus one more sprue and the metal Beresos model - which would run over $220 for them that way, so not a bad deal. 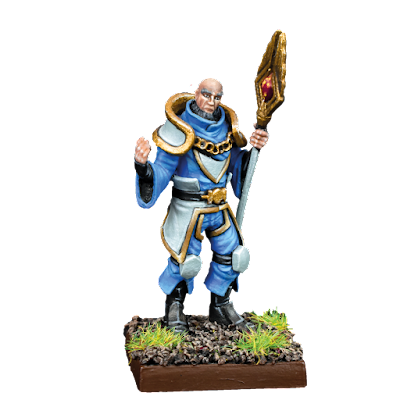 Basilean War Wizard, MGKWB201, £9.99/€12.49/$14.99
For Basileans, magic is an integral part of all walks of life, including battle. War-wizards, masters of fire and weather spells, wreak havoc upon the foes of Basilea with inferno and lightning. In particular, magic has been found to be a potent weapon to counter the denizens of the Abyss, against which it seems to have a greater effect.
Contents:


But wait - there are still a couple of things missing - Ogres and Arbalest.  Lately Mantic likes to spread the Kings of War army releases over two months - so keep watching.