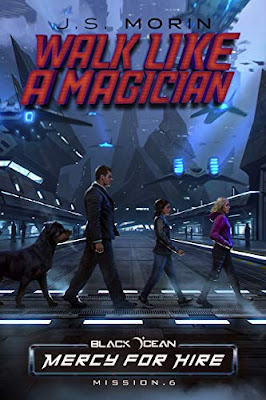 What would you do, to what lengths would you go, to get back the part of you that you lost?  When last we left Esper and company, they had just rescued Tiffany from a local sect of the Cult of Ra.  Along with the holovid action hero Wesley Wesley and her loyal Megalodog Kubu, the worst bounty hunter in the galaxy (because good ones get paid!) swears to take down this threat.

What does a wizard without magic do?  Well first they have to get a ship, and who better than one owned by a retired couple aching to help give the cult a black eye.

Morin is now adding more 'permanent' characters to the cast, rounding it out and growing the pair into a team, which is nice and gives him a chance to explore the Black Ocean universe a little more than just Esper and Kubu can do alone.

Is it spoilers when the book description itself says that Esper gets her magic back?  Not really, but it came in a bit more drastic and unexpected way than I expected, though in a galaxy of science fiction and magic, are any consequences truly as bad as they would be in reality.  However easy it may be to overcome the physical effects, it is the mental ones that will take their toll, as the evil influence now returns.  Making a classic deal with the devil, even if the devil is yourself, will still have long term effects, even if she gains back the power she so desperately missed.

Keeping with the cinematic styling that is the hallmark of his Black Ocean books, this is the episode where the characters have a chance to take a step back for a while and deal with what they have just gotten themselves into.  A simple climax leaves the team back to full strength and the reader ready for the next confrontation.  While a little slower than the last book, it is still a great read and nice continuation of the story. The formula of taking four books to fill a mission pack gives us a beginning, a couple of character building episodes (of which this is one) to build to a final, big climax (which I assume is coming in book 8).  Of course I had thought that Morin would wait to give Esper back her powers until then, so what do I know?  But he is keeping me hooked and interested enough to eagerly await the next installment.

Because it is all fun and games . . .
#BlackOcean #review #WalkLikeAMagician