If you don't love me now 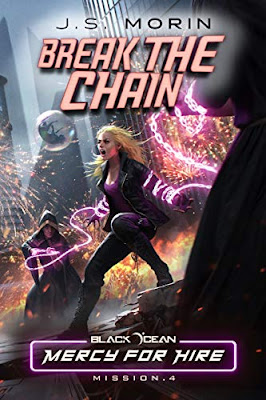 Break the Chain is the fourth book in JS Morin's Mercy for Hire series about the wizard bounty hunter Esper and her NOT dog companion Kubu.  The pair have been on the run, but you can only run so far before your past starts to catch up to you.

This is my favorite of the Mercy for Hire books so far.  The cinematic feeling continues, and this wraps up the season (or the Mission Pack, as it will be packaged) nicely (though the season is more akin to Sherlock then Star Trek (i.e. a handful of longer episodes, as opposed to many shorter ones).  Much of the previous books have been building up to this, and it is nice to see some previous characters return.

There is quite a good mix of action and a bit of intrigue in this one - the magical battle on the cover being one of the major events of the book.  Getting a chance to see more of Esper's past, both events from previous books (in both this and the original Black Ocean series) is nice for fans of both (though I'm not yet finished with the Black Ocean books to have already seen some of these events there) as well as providing enough for new readers.

It nicely wraps up several story lines, yet leaves it open for the next season (which Morin as already said he is working on book 5), setting up a new larger story arc in which to embed the next mission pack.  It both has a satisfying conclusion and leaves you wanting to see what happens next.

Highly recommended, and I look forward to the next season!