April 13, 2018
With the date for the upcoming War Kings GT slowly creeping up at approximately ten times the speed of sound, it is time for a shoutout to another of our sponsors.  THMiniatures is a Canadian company that makes fantastic resin terrain pieces.

I've actually written about THMiniatures terrain before, not just once or twice, but three times now.  I first discovered them in March of 2015 when I pledged for their first kickstarter.  I am always on the look out for cool new terrain pieces, and these fit the bill exactly.  The pit+grave was so awesome I actually bought three (though eventually I sold one to a friend).  Then they came out with their second one for volcanic terrain - and I got enough to fill a table (and had to buy a matching battle mat!).  I also backed their kickstarter for snow covered terrain, and though this one did not succeed, they were able to begin producing some of the snow terrain.  Of course I bought some, but didn't actually get my act together enough to get it when he offered it at a discount for kickstarter backers.

Even with international shipping, everything I've gotten from them has been extremely fast, and the one issue I had with a kickstarter was resolved easily and quickly.

They jumped at the chance to sponsor our tournament, providing a sample piece of terrain for ALL the participants.  At first they asked which of their terrain sets to use - either fortifications, ruins, volcanic or snow.  I made the simple suggestion that they send a mix from all sets, if possible.

So they sent me this picture, and they just arrived in the mail.  There are 17 different samples from all five of the ranges! 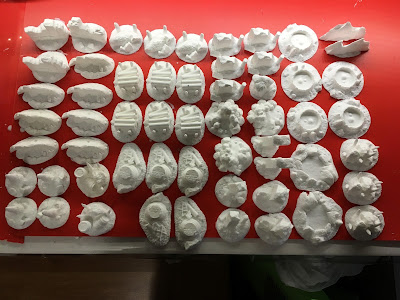 First, from the Ruins set.
The Fortifications set

The Volcanic set:
The Hordes collection

And the latest Snow set

You can see some of these that I've painted up here.  I really like THMiniatures terrain pieces.  These smaller ones don't quite fit for Kings of War individually (though they will be great in Vanguard), but I have thought of combining a few on a base for an area of difficult terrain (where you can remove the items on top (like people do with forests).

I've backed two of their kickstarters (and a third that didn't fund), and I look forward to their next set of releases, be they straight retail or kickstarter.

What is your favorite theme, and what theme would you be interested in next?