April 19, 2018
The relentless ticking of the clock brings the War Kings GT to within only a few more days.  Today's spotlight is on Peacekeeper Games. 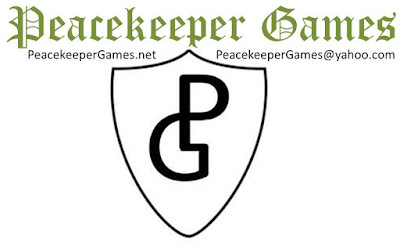 This is a name which I don't think anyone is familiar with yet.  It is the company formed by Karl Kersten from his kickstarter that I talked about here.  Well Karl was packing up the shipments for the kickstarter and he saw our tournament - so not only did I get my pledge, but he threw in a few more arcs as support for the tournament.

They have 16 sizes (Chariot Regiment and Large Cavalry Hordes use the same arc) in four color combinations (Black with Gold / Red or Yellow  and Green with Gold).

The arcs are simple to use.  Simple line the arc up with any two corners, then slid those corners to perfectly pivot around the center of the unit.  There are 15 degree marks to help you measure exactly how far you pivot.  Each of the standard unit sizes requires it's own arc.

The nice thing is you don't need all sizes generally - just the sizes for the units your are using.  So for my own army - I need an Infantry Horde, Large Cavalry Horde (because the LOGs are on 50mm bases, not standard Large Infantry 40mm) and a Cavalry Troop (for the 25mm troops of Gargoyles).

In order to make these a bit more transportable, the larger arcs come in two pieces that fit together like a puzzle.  Unfortunately the large piece is not marked, but it is fairly easy to determine what goes where.  Simple line up all your left arc pieces in size order and your right arc pieces in size order - now each left arc matches the corresponding one right arc.

So I have created a pack for the last place player - not just Ohio War Kings dice, but also these three arcs as well as some of the templates from Ironheart Artisans.  Because we all know that you only lose because your dice hate you, or maybe you aren't measuring quite accurately enough.

Which size arc do you think you would use the most?