April 09, 2018
This past weekend the 2nd annual Daycon Game Day was held.  This year we had a new venue, and once again the Ohio War Kings hosted a small Kings of War tournament. 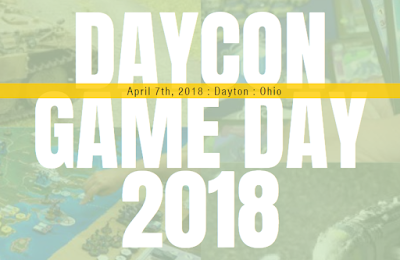 This wasn't a big event, and we had 8 players this time.  Since we switched venues, we weren't sure how much room we would have, so we kept it small.

We took a break for lunch, which allowed me to do some paint judging (and run home to get something I forgot for game three).  (It was really nice to run an event that was only 15 minutes instead of two or five hours away from home).
Then it was time for round 2.
A quick break, and we were off for round 3.  This was a playtest for a new scenario for the War Kings GT in 2 weeks, and everyone had fun, as well as offered some good feedback on it.
And that was all it took.  A small, quick, fun tournament.

Of course, all the scores are up on warscore.


So the quick fun one is done - and now War Kings GT is less than two weeks away!

Because it is all fun and games . . .
conventions Daycon Kings of War Tournament