This year we had two tournaments at Gencon.  The first was a How You Use It! event, where the armies were preset on the tables, but the players changed each round (I ran the same one at Origins a couple of months ago).

Everybody had a lot of fun.  We got a kick out of four Carter's being involved (me for running it, two of my sons, and Tyson who randomly shared our last name!)
I thought it would be fun to use the matchups in the "Edge of the Abyss" worldwide campaign.  We didn't use the scenarios or special rules (as this was a tournament), but we had the following matchups (good on the left v evil on the right).  (Romans were good because they represented the empire that when it fell, resulted in 800 years of dark ages).

Making sure that no one played on the same table twice took a bit, but even more so was this is the first tournament I have ever scored by hand.  For some reason, my laptop refused to turn on.  Having worked for a few years in customer support, I figured it was either a PEBCAK or ID-10-T error.  Of course it worked fine back at the hotel and the next day for the Kings of Gencon tournam

It boosted my confidence when later, after entering the first round data, the software made the same matchups as I did manually.

Round two quickly followed
We took a dinner break, then continued
and I after a long day, I forgot to get pictures of the last two rounds.

And the winners were:

And the dice - why they are the new, exclusive, Ohio War Kings dice! 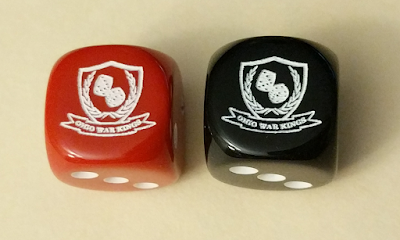 Of course you can check it out at warscore.net.

How You Use it Final

Because it is all fun and games . . .
Gencon How You Use It! Kings of War Tournament