Setting the stage for War!

July 31, 2017
I have found lately that I like terrain.  I like the MDF building kits (like the ones from 4Ground - I have their Timber Framed Cottage and a couple of their Norse houses), and I love the resin terrain from THMiniatures, not to mention the stuff Mantic has done with Dungeon Saga and their latest Dungeon Crate kickstarter. 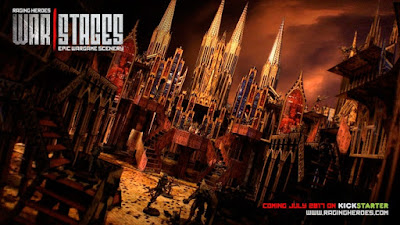 So I was intrigued when I heard that Raging Heroes was doing a terrain kickstarter.  One note - this is a very short kickstarter campaign - it only lasts a week - so it started on July 29th and will end on August 5th at 3:00 PM EDT.

So what exactly is this about?  Raging Heroes is launching a new line of high quality modular terrain pieces, starting with a Gothic Cathedral. 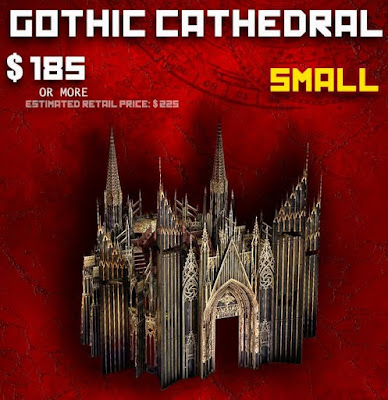 This is the smallest, base pledge.  However, before any stretch goals and add-ons, it has 323 pieces 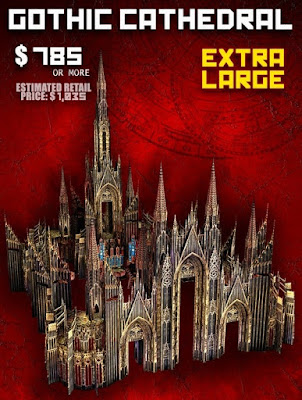 The largest pledge level has (to my count) 1443 pieces!  And that does not include the clips to put everything together.

Just how big are these kits?  They put pictures of them on the site -

The extra-large set, if assembled as shown, won't fit on a standard 6'x4' game board - it is over 30 square feet (and total space is over 170 cubit feet!!  In comparison, the small one only takes up a little over a quarter of the table.

It funded in 16 minutes (their goal was $60K), and like their other kickstarters, I expect they will have a lot of stretch goals (so far they have already hit 20 goals).  Of course if the base pledges just aren't enough for you, you can also add on the daedalus expansions as well.

With the new release of 40K 8th edition, it seems like the sci-fi gothic theme is just exploding.  It will be almost a year (if on time, always a crap shoot with kickstarters) before it ships (June of 2018). Of course this set will look especially good if you are collecting any of the "Toughest Girls in the Galaxy" models for any games.


They have stated that this is a limited edition kit - they are making enough for the kickstarter plus a small overrun, and do not expect to be able to make this again once sold out - so if you are interested then it highly recommended to get in on the kickstarter.

Because it is all fun and games . . .
Kickstarter Raging Heroes Terrain Warstages