March 30, 2017
Adepticon is more than just the Clash of King GT.  There was a full four days of Kings of War goodness going on. 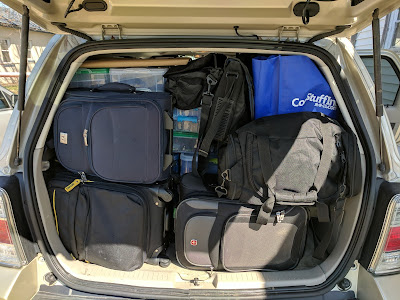 What is more amazing is that we somehow managed to stuff even more for the trip back.

Thursday was supposed to be my one day of NOT running events - but as they said the best laid plans of mice and men . . .

Jon and I did the team tournament again this year.  This had a great turnout on Thursday with 15 teams competing.  Unfortunately the pathfinder scheduled to run it was not able to make it there until Friday, so they tapped another.  However he had very little experience with Kings of War, so I stepped in to help score the event (and pretty much run it, except for the paint judging and handing out the prizes).  Shawn did take a couple of my demo armies and play the ringer however.

Unfortunately I wasn't thinking about this as a TO, and instead was concentrating on playing our Martian Dead army with my son, and it wasn't until later did I realize I did not take a single picture of the event.  (I will have pictures of our army, but that is another post).  Anyway, Jon and I won Best Themed Army and came in 2nd place overall.

The full results are on warscore.

Friday I was in full TO mode for the campaign event.  This and a Kings of War: Historical tournament were scheduled to go on at the same time, however turnout was very disappointing.  The historical tournament had two people pre-registered, but only one showed up.  The campaign had eleven pre-registered and only had four, so at least we had the event.  At least with only two tables they were able to play on the snow tables, which fit the theme.

Because it is all fun and games . . .
Reactions:
Adepticon conventions Tournament