Just when you thought the campaigning was over

Back in July the first US Kings of War Campaign Day took place (what, you don't remember my blog posts before and after)?  It went so well that we are doing it again!

Join your fellow Kings of War fanatics for the 2nd annual campaign day on January 14th, 2017!  All you need to participate is at least 2 players and a place to play - it can be as small as your home game table or you can take over a store!  Mantic headquarters is even getting in on the action.

So what is the US Kings of War InterNational Campaign Day?  It is basically a chance for a bunch of people (originally in the US, but now internationally) to all play a bunch of Kings of War at the same time.

Last time we had 140 players in over 30 locations spread across 5 countries, and this time we want it to be even bigger!

To make it easier for international players, the event has been broken down into three regions - Australia, UK and US.  Each region has four games that affect the rest.  You aren't restricted to just your region if you want to go all out though - you could go for 12 games over 24 hours if you choose (and are crazy enough to try).

Each location will have a location leader, who is responsible for getting results in on time and notifying their own site of the bonuses that may apply from the results for the next game.  The schedule is set, so no slacking! 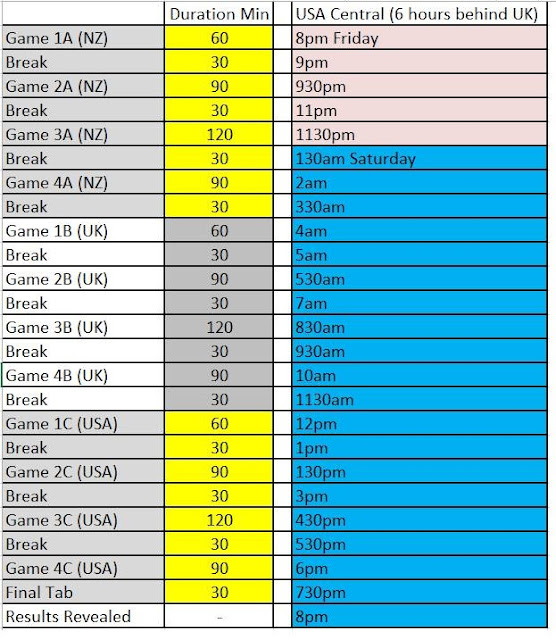 This means that here in Ohio, or schedule is:

For those of you who want to put a little more "flavor" into your Kings of War armies, there is something special this year.  When playing a game in the event, players will add a custom Living Legend to their army. This hero will be known as your Commander.  Everyone participating in the campaign day will be creating their own leader to bring greatness to your force!

Here are the rules for creating your Commander:
So prepare your army, gird your loins for battle and prepare to drive your enemies before you, their women ready for many lamentations.

Because it is all fun and games . . .
Reactions:
Campaign Kings of War