Even kickstarters need a boost

November 07, 2016
Mantic games announced last week that they had a special booster set for kickstarter backers.  These are the boosters with models that ARE NOT part of the kickstarter (i.e. the retail exclusives).  You can preorder them at Give the kickstarter edition a boost (they are scheduled to start shipping the end of November. 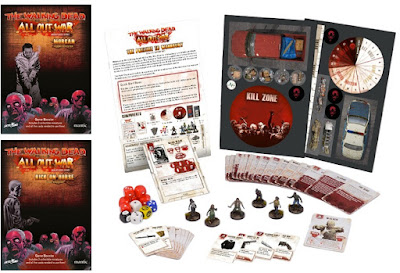 There are two booster packs, and one expansion listed (they do not currently have pre-orders for any of these separately however).  They have listed the contents of each of these that you get in the bundle.
Rick on Horse Booster
Morgan Booster
The Prelude to Woodbury - Solo Starter Set
However the only pictures are of the expansion set.  Until now.  The Walking Dead: All Out War Game Painting and Terrain ideas has gotten pictures of the miniatures, which I stole to share with you. (I would just use links, but I have found that those tend to get broken over time, and I hate when I go back to check a post and all the pictures are now broken links).

So, first up is Rick on Horse (of course, of course), the star of the first booster.
Next up are Morgan and Duane, the father and son from WAY back at the beginning of the comic run.
Looking at the picture of the contents of the "Prelude to Woodbury" set, it seems that these two walkers are the ones coming in the boosters, though I don't know which is in which.  The female one would actually go well in the Morgan booster - of course that would mean <spoiler> it is his wife </spoiler>.
The last survivor is one everyone wants - Brian Blake - otherwise known as the Governor.  Now remember this is the comic - he looks pretty different than what most people think because of the tv show.  However it is pretty true to the comic
Part of me wants to see how he would fare against Negan (but then another says Lucille would just kick his ass).

From the picture, it appears these are the walkers in the "Prelude to Woodbury" set.

So now you at least have an idea what the models are in this first set of add-ons.  Remember these ARE NOT available as part of the kickstarter, so you must either order them from Mantic directly, or even better have your FLGS get them for you.

Because it is all fun and games . . .
Reactions:
The Walking Dead