In case you missed it

October 04, 2016
Tabletop Gaming News recently posted up some new pictures from the Star Saga kickstarter - some are additional artwork (or better versions previously seen) but they did have one new mercenary that had not been seen before - the Crystallan Brawler - Arkoline

Mantic has already mentioned two additional expansions they would like to do - one featuring the Veer-Myn, and another with the Asterians.

However it looks like tomorrow they are upping the game.  Over this past weekend they were putting out pieces of a picture which turned out to be a big Nameless - well nameless.  In a recent update, they have put out the following graphic: 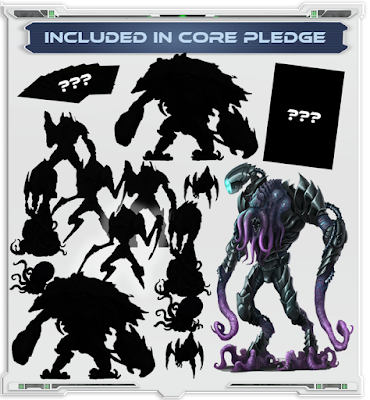 So if you ask me - this looks like cards, tile sheets and a bunch of new minions and a boss.  I would say the Nameless are coming to Star Saga in the first scenario expansion.  Based on the dreadball models, it looks like the boss is a big Sticky Guard (aka the Giant Nameless Spawn), there are two of the Hard Guard types (aka big crabs), some of the Strikers (aka shrimp in two poses), a couple of octopus type things (as if there weren't enough tentacles already) and some small crab types, and what even looks (to me) from the outline to be some sort of spawning 'thing'.  Just guessing - but it looks cool.

It kind of surprises me that it is INCLUDED in the core - I would think it would be a perfect add-on (I sure would easily give $25 more for this (which is what the Dungeon Saga expansions were in the kickstarter).  I might even want 2!

Because it is all fun and games . . .
Kickstarter Nameless Star Saga