Using only the power of my mind

September 29, 2016
The kickstarter for Star Saga - The Sci-fi Dungeon Crawler kicked off on Sept 26th, funding in just under two hours.  Since then several stretch goals have been met, including 3D scenery, a new mercenary and a new boss.

There has been some mention in the kickstarter comments as well as the Star Saga Fanatics Facebook group that with the huge Warpath universe, there needs to be more aliens in the game.

Deadzone and Warpath both have a variety of aliens, but it is Dreadball that has the most.  With 25 teams (and four more coming from the DB2 kickstarter next year), there are just a lot of possibilities.

I see there being two ways to add in more variety - additional alien mercenaries, and expansions based on other, specific alien races.  An expansion against the Z'zor could be a 'classic' bug hunt in the cramped tunnels of a hive world, and the Nameless already lend themselves to Cthulu'esqe nightmares of tentacles and claws in an underwater world.

But what about mercenaries?  One of the first stretch goals was a completely new mercenary from a new race.  Existing races could also have them.  It doesn't take a psychic to imagine what these could be - or maybe it does.

A psychic mercenary with telekinetic powers.  We already have a healer, but aren't Monks also traditional classes for a dungeon crawler.  The Tsodochan are techno-telekinetic monks, and Blaine's connections in the underground dreadball circuit are sure to bring him into contact with some of these that may take their responsibility to spread good word to a more aggressive bent.

Give a mercenary like this a special ability to move other models (much like the 'push' spell in the original Dungeon Saga) and there is potential for all sorts of fun.

Really, is anyone still reading this and not looking at the picture of a Tsodochan mercenary already?  I could just keep going, making things up and no one would notice.
In their update for breaking the $180,000 stretch goal, they give a hint of what is to come.

Behind door number 1 is the Tsodochan mercenary Kixai Uru.  Number 2 looks to be a new version of the Survivor from Deadzone. 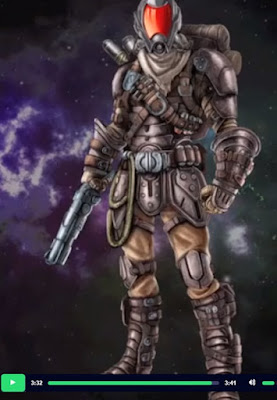 Door number 3 is a Forge Father.

Lastly, hiding behind door number four are a couple of lab technicians.

The kickstarter video actually has a LOT of stuff in it - if you want to go through nearly frame by frame.  I'm not sure I got it all, but here are some more goodies.


Finally, how about the new robot previewed on the Mantic Weekly video for Sept. 28th?