Yes, the most recent kickstarter for Mantic is now live.  You can join in the fun here.  This will be a quick one - it ends August 7th at midnight BST (which is 7 pm EDT) - so just after Gencon ends.

Why are they doing this?  In their own words

"We are funding the 2nd edition of the game in response to community feedback. Players wanted teams to be rebalanced, the league rules to be improved and a few smaller niggles to be sorted out. The work on second edition will do this and more, supporting the existing community and sparking growth in the player base once again."

So what can I say about it that hasn't already been said?

The plan is to get four teams funded - two in the new box set and two more.  The box set will include robots and yndij, and the two additional teams are Sumo lizards and Cyborg undead. Everything at this point is still in design, however we do have a couple of new pictures

First is the posing for the Robot team that comes in the base set. 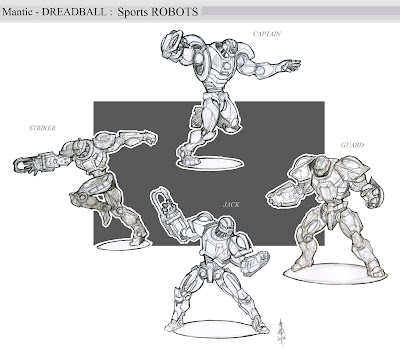 And then posing for the Sumo Lizards (this was snuck out of HQ so quickly we didn't get the title changed). 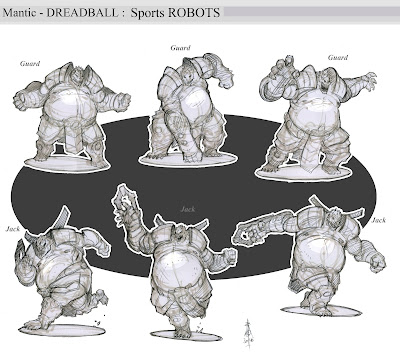 One of the new features is captains for each team.  This will be a great use for that MVP you have sitting in a box that is never used (ok, mine have never been used).  You can add a team to your kickstarter pledge for $25 (which is a great price, as they have eliminated the boosters, so you now get all the poses (and prone figures, if available) in one box).  In addition, each team comes with a team specific MVP to field as a captain.  These are not listed on the main kickstarter page yet - but you can see them on this update

You can also add on custom dice, additional bases, plastic counters, and they even have a club pack with components for 6 players (3 each of pitches, card decks, 2 balls, ref and plastic counters).