Getting ready for the next big thing

So there might be someone out there who is a fan of Dreadball but not aware that the new kickstarter is starting on July 22nd (and reads this blog).  Mantic has been pushing out LOTS of pictures of the new teams and art, and hinting at some of the gameplay changes.  So if the Mantic Blog isn't something you subscribe to, here is a rundown of what is to come.


First, this will be a 'small' kickstarter - running for two and a half weeks - ending on August 7th.
They plan on new editions of both the base game and Ultimate, and right now the talk is about four new teams.

The box set will have a new pitch with larger hexes (something sorely needed.  It is based on the Gruba-tek VII Coliseum deluxe pitch, with spaces for cards, tracking which players have been activated and even what type of coach you had for the turn.

The cards are being redone, and there are some changes to the dice (though not D8's, so don't worry about that).  It would not surprise me if they came out with custom dice - though anytime you use D6's you can always map them to 'normal' ones.  In addition Jacks are also being looked at - I've heard the 1 hex movement restriction for slam/throw is going away - which to me is a great thing - making base jacks much more useful (truly jack of all trades but masters of none - represented by them not getting bonus dice).

They are changing the model for the ball - making it slightly bigger, and adding a spike that fits into the new clear bases - so making it easier to keep track of who actually had the ball.

There are four new teams they have talked about - and showed preliminary versions of them.

Of the new team ideas - I like the cyborg undead.  Essentially recycled players who have been killed - so they come from all races.  They are tied together by the eyepieces and heart plugs.
The other team I like are the sports robots.  Not recycled construction robots, nor the shape shifting kind, but robots built and dedicated to their roles. 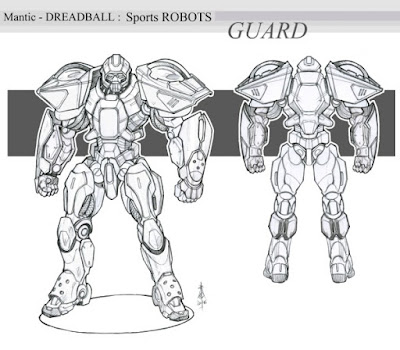 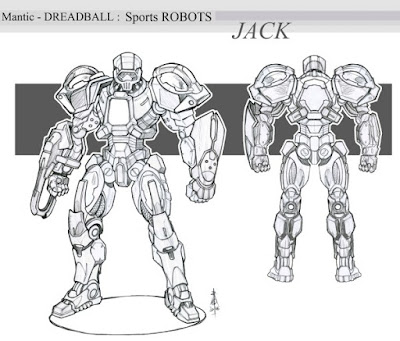 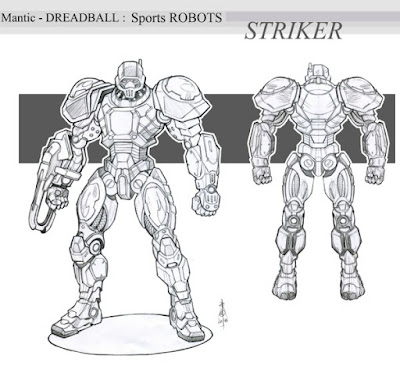 Mantic has also released the concept for a new exclusive coach

and a new refbot - that instead of having eyes in the back of her head (I actually loved that little detail) will have a 360 degree visor (plus thicker ankles - the old one tended to break a little too easily).


Mantic has announced a $100 sweet spot for the kickstarter - I expect them to have a lower level as well that is an 'upgrade' kit (dice, cards, book).

Because it is all fun and games . . .
Dreadball Kickstarter Mantic