January 27, 2016
How many tournaments have you played in where you just had one round that was horrible, and you wish you could fix it?  Well coming up in March is your chance. 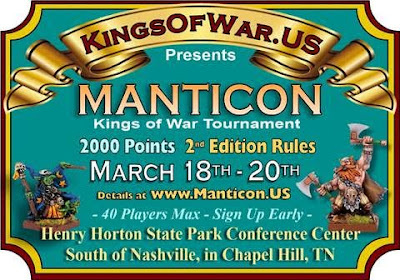 Manticon is a Kings of War tournament with a twist.  The main tournament is 4 rounds on Saturday. However on Friday night and Sunday morning there is a bonus round.  You do not have to play in either of these rounds, and even if they do they CANNOT negatively affect your score in any way.  However you will have the option to replace your lowest round score from Saturday with your LOWEST bonus round score.  Yes, LOWEST.  So you can't just crush your opponent in KILL! on Friday night with your super nasty all shooting list that cannot move and replace your crappy INVADE! score with it.  But if you do well on both Friday and Sunday, then you can replace a score.

The scenarios will be almost random.  The one Friday is set :-).  However for all the others, the lowest ranked player from all previous rounds will pick the scenario for the next round.  You can only pick once, so if you are hugging the bottom working hard for the wooden spoon then the next worst score gets to pick and so on.  But we don't want to make picking the next scenario that easy either - we are thinking about something fun like having each scenario be a balloon on a dart board.

We want to make this more than just a tournament though, so we have some other fun events planned.  On Saturday night there will be an Auction, and on Sunday afternoon there will be a Figure Fair - where you can bring your models to swap and sell.  In addition we plan to have open gaming until midnight Friday and Saturday, and as many demos of other games as we can do.

Not only that, but there will be vendors available as well, and it is being held at Henry Horton State Park (ok, it is in March so while camping is available it may not be ideal).

Tournament information is available in the sidebar to your right, if you are on a full screen device (for mobile devices click here ) and the full website can be found at manticon.us.

We plan to make this an annual event, expanding the offering of Mantic games until it is truly a Mantic Convention!

Because it is all fun and games . . .
Reactions:
conventions Kings of War Mantic Manticon