Kings of War returns to CincyCon

May 07, 2015
On May 2nd, Kings of War returned to Cincycon.  Many dice were rolled, enemies crushed, and the lamentations of their women was heard . . . wait a minute.  I'm going to have to stop making that old Conan joke.  Half the players at this tournament were women, and the current reigning Adepticon champion is a woman (who was one of the ones playing at this tournament).  So attempting to be less sexist, much fun was had by all (and not a lamentation was heard, and there was much rejoicing).

The day began with a father/son grudge match, with the youth and skill losing out to age and treachery, as my Abyssal Dwarfs managed to defeat Jon Carter's undead.   Adepticon champion Kara Brown's Abyssal Dwarfs easily defeated Beth Hill's Twilight Kin, and Amy Stamper's dwarfs managed to take revenge for one of the many slights they had received (or believed to received) from Keith Ambrose's dwarfs.
Round two showed some hot and steamy Abyssal Dwarf on Abyssal Dwarf action, as Kara's evil stunties beat mine.  Undead faced Dwarfs, and managed to recover some pride beating the dwarfs and adding to their ranks of undeath.  At the other end, Elves reenacted their age old civil war against the Twilight King, and Beth's leather clad pansies beat Keith's tree hugging pansies (in my mind I see this as a slap fight).

The final round saw Kara face off against Beth - so now instead of good dwarfs v. good elves, we have evil dwarfs v. evil elves.  To no one's surprise, Kara came out on top (she wouldn't be the reigning champion if she lost a lot, would she?)
Jon and Keith squared off, undead v. elves.  A closer game, but Jon managed to pull out another win to put himself in second place overall.

On the final table, Amy's dwarfs fell to their evil cousins as my Abyssal Dwarfs pulled victory from the jaws of defeat (if I had not gotten a very lucky flank charge on her Brock riders (Badgers?  We don't need no stinking Badgers!)
Of course the armies were all very well painted and looked great. 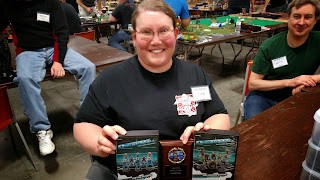 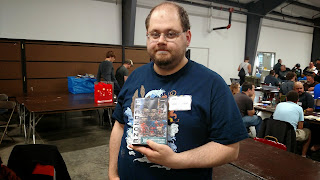 and Keith taking home best appearance with his elves. 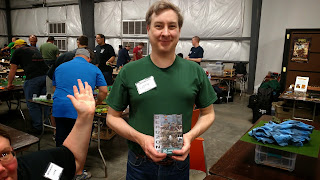 Thanks to everyone for a great day of gaming, and I hope to see even more people next year.