February 12, 2015
But I didn't think it had been THAT long since I last posted here. I guess that is the problem when they quit requiring us to post - no one does. Still, I thought I had written something since Gencon last year - which was almost six months ago.

So what is going on since then? I ran a tournament at the Legendary Game Faire in October, and we recently finished up our 2nd Kings of War escalation league, and capped it off with a tournament last month. This month we have started our first Dreadball league - with league play starting on Monday (we took the first two weeks for people to learn the game - most of them had never played before). Next weekend (the 21st) we have the Clash of Kings Regional Championship - the winner gets a free ticket to the Clash of Kings at Adepticon. I have had a lot of interest in this - it looks to be a very good turnout (and even a couple of people concerned that we may run out of space - which is a problem, but a good problem to have!).

On the hobby side, I finished another 1000 pts of Abyssal Dwarfs for the escalation league, and will finish my second Martian Dreadball team (for a friend, to get him to play in the league) so it will have 16 players ready to go. I've been working on stuff for Adepticon in March, including messengers and hills and walls (since I need to have 4 more tables than last year - bringing me up to my max of being able to support 24 players - big enough for just me I think, and bigger than the local store can handle. I also painted up my Dreadball Xtreme set, including double teams for both the convicts and Kalyshi.

I also just finished Arhak Soulbinder for a game on Saturday - a friend of mine wants to play and try out his list for OHCon in April which allows both 25% allies and special characters, so I figured this was a good excuse to finally paint him up. 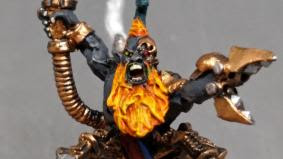