We had the first Kings of War tournament at CincyCon. Turnout was a bit disappointing, as we had only three registered players (I played as a ringer to allow us to do a round-robin style tournament). We did have several people come by however during the games. One was very excited about the game, and wants to start playing. Another actually plays with a group in Columbus (he plays with Josh) but wasn't aware of the tournament.

I'm trying to collect email addresses for interested people in the area so that we can get more information out about events.

Everyone had a good time. In the first round I beat Josh's Elves with my Abyssal Dwarfs, while Jon best Keith's Elves with his Undead (yeah, it wasn't a good day to be an elf). In the second round, Jon and I tied while Keith beat Josh in hot elf on elf action. In the final round, Jon beat Josh and I beat Keith. This resulted in Jon taking first place, Keith second, and Josh got best appearance.

Josh carefully measuring his Drakon riders move at the start of our game while Bill watches the game. Bill so liked what he saw that he said he is going to pick up an army and start playing! 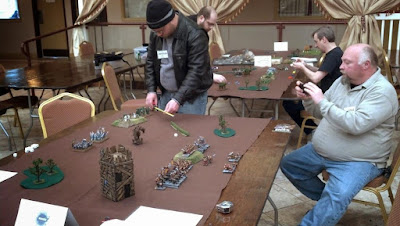 Jon turns to ask a question as Keith studies the battlefield. 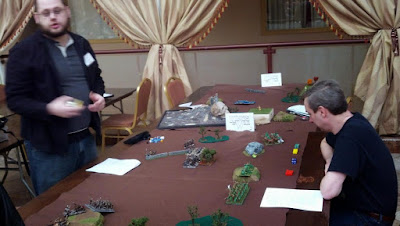 Jon (who, btw, is my oldest son) isn't very excited after seeing how powerful the Angkor Heavy Mortar is - watching it take out his Revenant Cavalry in one shot 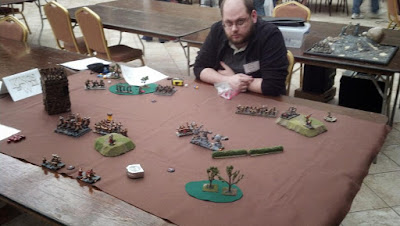 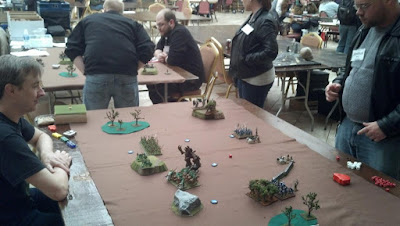 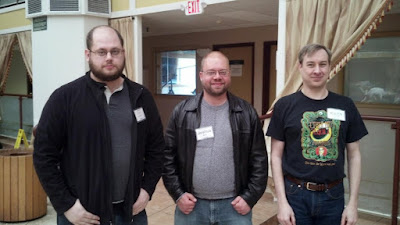 Final scores are on warscore.