March 11, 2014
The final chance to get games in, and turns out they all made a difference. Nothing like waiting until the very last minute!

The weather finally cooperated now that spring is around the corner, and over half the league turned out to try to get in a couple of games. Amy took on Alex in a hard fought battle of dwarves against the undead, but in the end the brittle bones were sent back to their graves by the artillery bursts of the stout dwarfs. 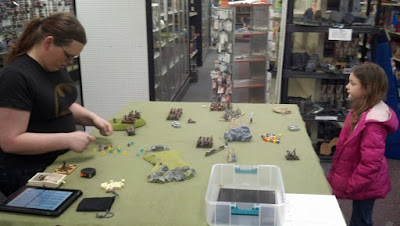 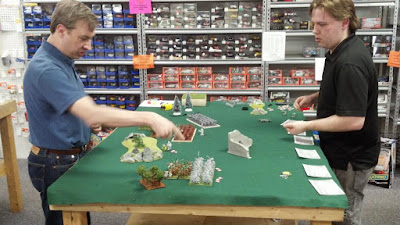 In a very close game, Keith was down to his mage queen, a bolt thrower, and a unit of forest shamblers, while Jerry only had an Ax Horde and a flagger remaining. The horde charged up the hill to attack the bolt thrower - with 60 attacks on the war engine the didn't even bother to roll the dice to see how many wounds it would take - just did the nerve test to easily destroy the frail war engine. But no, the elves refuse to budge with double ones coming up, leaving the horde's flank exposed to the forest shamblers. 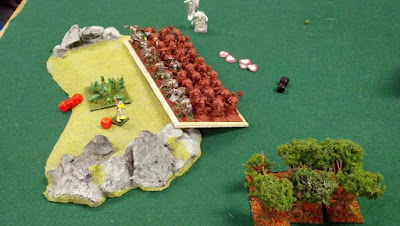 The bloodthirsty trees then charged in, pounding on the orcs. However fate it seems is not without a sense of humor, and just as the war engine survived, so did the orcs get snake-eyes for their nerve test. 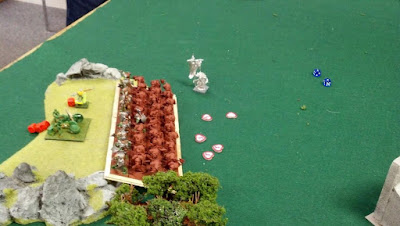 Luckily for Keith, they rolled and got a 7th turn, which saw both the bolt thrower and horde get destroyed, leaving Keith the winner with his trees and mage still alive.

Keith then went home and handily beat Beth's Kingdoms of Men army to finish out the games for the league.

Next up - the tournament on Saturday, and then CincyCon the weekend after. Everyone is looking forward to is, though unfortunately Amy and her dwarfs will not be able to make it due to work.

This was the last Monday night for the league. April we will start a DeadZone campaign, and then in the fall do another Kings of War escalation league (running a little faster and shorter), with the idea of being able to have a 1500 point tournament at the end (that may allow up to 500 points of allies, so people don't have to build the same army if they don't want to).

We may also try to squeeze in some Dreadball here as well, but people are more excited about Deadzone.
#ManticBlog