March 22, 2014
Last night was the first Dreadball tournament at Cincycon. Unfortunately, we only had two players show up for it. Apparently there is a small group that is playing in Columbus, but two of them backed out at the last minute.

Mike and Keith played a couple of fun games. For Keith this was only his second and third games ever, and the first time he had actually played with his Ver-myn team, and as expected against a more experienced player, Mike crushed him with his Asterians. The first game they played was particularly one-sided, as Mike scored a four point strike on his first rush, had his guard pull a "dirty trick" to send Keith's striker into the sin-bin just before he was about to attempt to score, then come back and score a second four point strike to end the game on rush 3. 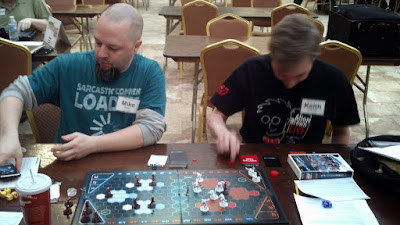 They played a second game, and this one at least went to rush 14 before Mike again managed to score a 7 point landslide victory.

They did both have fun however. I let Mike know about the upcoming Dreadball tournament in Columbus at Battlecon - he actually knows Alan Blount who is running this (Mike runs the website for Alan's Battle Brothers podcast), and said he is excited about it and plans to attend with his friends.

In addition to this, I did manage to get in a Dreadball demo as well, and did have quite a bit of interest as people were walking by.