February 23, 2014
Saturday turned out a bit slower than I would have liked. I had my tables set up from 9 - 5, and had to clear them off because they had a keynote speaker at 6 and then some other games scheduled in the evening on the stage. I did get in a demo of each game however, and two of Kings of War. Russell especially enjoyed Dreadball, and was aware of the previous kickstarter, but not the new one (he definitely is now!). He had thought about picking it up before, and after playing is much more interested in it, and in the new kickstarter.

Russell studying the Dreadball book, trying to decide which team he wants first 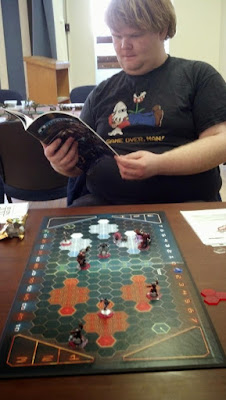 Riley tries Basileans against his cousin Lexy with elves 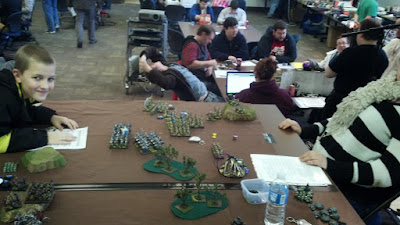 On Sunday I was only able to set up between 12 and 2:30, but managed to get in another demo as well (again with Luke).

Luke comes back to try more Kings of War, and find that goblins don't do too well in combat against orcs. 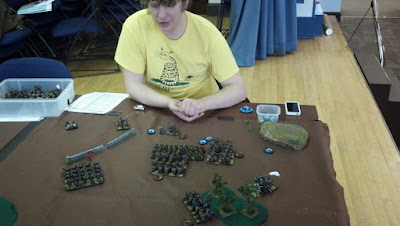 It looks like three people are strongly interested in the games (Deadzone was the least interesting to anyone). I talked to several other people, and everyone had fun.