February 23, 2014
UD-Con is a small gaming convention at the University of Dayton, sponsored by FASFAC ( the Fantasy and Science Fiction Appreciation Club). It ran from 5-11 Friday night, 9-11 on Saturday and 9-3 on Sunday.

I got there about 6 pm and set up a demo area on the stage. They asked me to bring some posters since they realized that I would be above eye level, so people wouldn't know what was going on. Luckily I had some, so I set up a table with Kings of War, and a second on with both Dreadball and Deadzone. 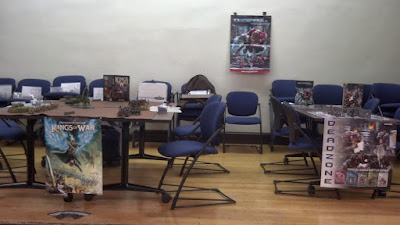 Friday evening I was able to run a demo of each system. The first two players squared off in Kings of War, and both enjoyed it so much that they each came back later wanting to play again with a different army. One (Luke) had played a lot of 40K, and really liked the system. He actually wasn't a UD student, but is currently in charge of a local gaming club that meets at one of the local stores (Epic Loot - I did a demo there in October) on every other Friday, and thinks his group would be good to do more demos for. (I know Epic Loot has at least some Deadzone, as my oldest son's roommate bought a copy there). He came back Sunday afternoon wanting to play again.

Erich was the other player, and he is a WFB Wood Elf player, but immediately liked Kings of War. He came back on Saturday wanting to give Dwarfs a try, and really enjoyed the games. 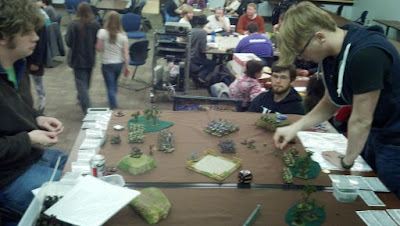 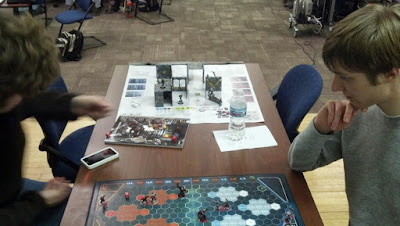 Luke and Russel give Deadzone a try 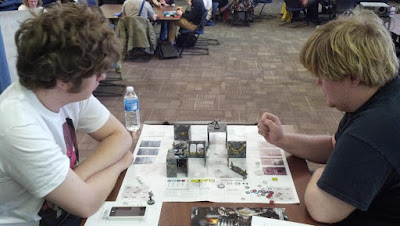