This week we had half the league members show up. What was more surprising was that we still had people painting. I expected a full, frenzy of people playing games, but only two games took place.

Jason's Dwarfs apparently got into the full beer stock, because they were ready to fight, even bringing along their tank (A steel behemoth). Unfortunately while beer may make you want to fight more, it doesn't make you fight better. The dwarfs lost first to Donny and his Ogres, and then to Kara and her Basileans. 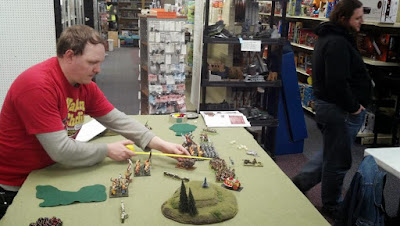 Donny moves up his Red Goblin Blaster to deliver barrels of flaming hot death to Jason's Dwarves (instead of the beer they were hoping for). Of course Jason takes that exact moment to turn around and talk to Amy :-) 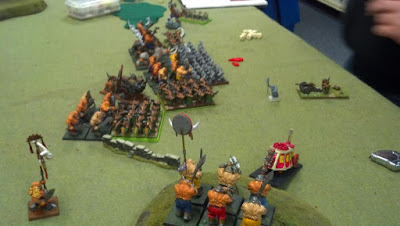 Donny's Ogres face off against the Jason's Steel Behemoth, with a huge scrum going on with the rest of their forces. 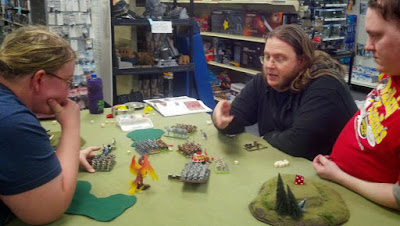 Kara contemplates what to do with her Men at Arms (modeled with Amazons) as Jason thoughtfully explains how he has baited her, and intends to flank them no matter which of the three units they charge. 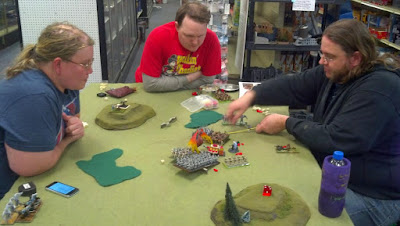 Kara watches intently as Jason re-positions his standard bearer to provide Inspiring to his troops in combat with her Paladins.

I am extending the final painting deadline to next Monday, to give everyone one more weekend to get their armies done! So one more week to get painting finished, and two weeks left to get games in, then finishing up with the tournament on March 15th!