February 11, 2014
Things are starting to heat up, though unfortunately not the weather. Most of the league members showed up, but still only a few had their full 1000 point lists assembled, so only two games were played, though one didn't count toward the league. 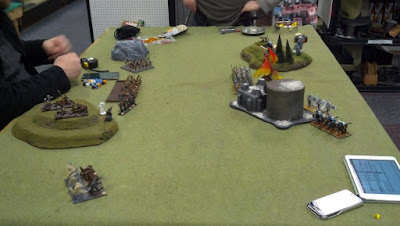 Jason and Amy working on their respective dwarf armies

First my basileans beat Donny's Ogres, getting lucky and surviving the blaster explosion that did seven wounds each to my paladin knights and Ur-Elohi (and five to one unit of Donny's ogres). Then the big matchup was between the two people in the lead for the league, Jon's undead vs. Kara's basileans.

It was in intense game, but near the end they called me over with a charge question - and when I explained it they realized that they had done it wrong a couple of turns earlier, as well as a couple of other issues. Since this game has a very good chance of determining the winner of the league, it was decided not to count this game at all, and to re-fight it later when we could be sure everything was being done correctly. (BTW, when charging and the unit has to be able to fit, it does NOT have to fit leader to leader, though that is preferable.) 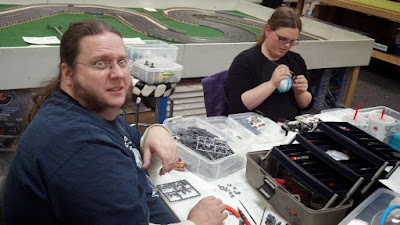 In addition to those games, I also got in a demo of Deadzone. I've found it interesting as when I first started doing these demos, the enforcers always won easily. This seems to have changed now, and the plague has started to win more and more, to where we have found that if you have experienced players then the enforcers have a huge disadvantage (yes, having two enraged plague in close combat with a single enforcer on turn one is not always good, especially when followed up by a third one the next turn (assuming the enforcer survived). 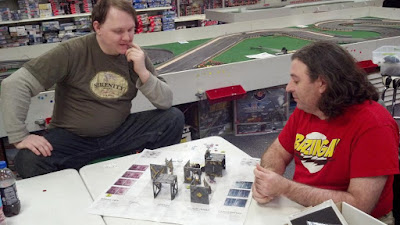