January 07, 2014
A very quiet week for the league, due to the horribly cold weather. There were only three of us, but the good news is most of Jerry's orcs have shown up, so he got in both his games for the month. His force is three hordes of orcs - and neither my ogres nor Jim's goblins were able to effectively take them out. Against my ogres Jerry could not roll a low route check - 11, 11 and 9 took out my three units (with the red goblin blasters only managing 5 hits each when they blew themselves up). The battle against Jim went a bit longer, but was actually more lopsided as most of Jerry's army was still on the board when Jim was wiped out (while I did manage to kill 2 of the hordes and the sniffs). For someone who had only demoed the game in October, Jerry is starting out pretty formidable. 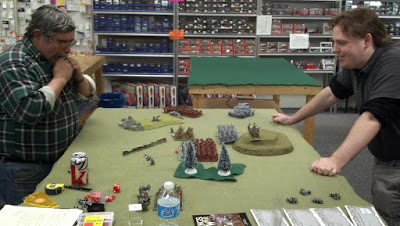 Jim worries about his poor sharpsticks facing the orc horde while Jerry smiles in anticipation (nice posing there guys!)