January 05, 2014
So this was the inaugural version of the Siege at the Tower as a 2-day WFB tournament. There were 33 total players (out of 36 that signed up), however 3 did not come back on Sunday due to the pending weather or personal reasons.

I set up to do demos Saturday night after the last round, but unfortunately very few people returned for the open gaming (maybe 6 people came back aside from myself, Bill the Organizer, and Alan who was the ringer on Sunday and also helped out with the tournament). Alan was doing a long Malifaux demo he had previously set up, and the few other people really weren't interested (though we did end up playing several rounds of San Juan). 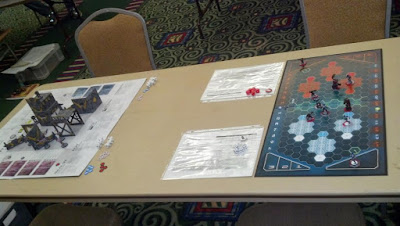 I did get in one demo for DeadZone - this for Alex (she is Kieth's daughter, they are both in the KoW Escalation league). She wasn't in the tournament, but came up with her dad anyway. She already knew she wanted to play plague - and boy can that little girl roll dice!!! It was nice to see the plague win the demo (for the first time for me). 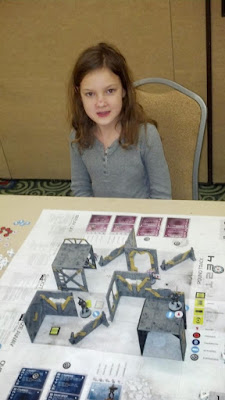