December 10, 2013
A great week, with 10 of the 13 league members attending! There was some model and bit trading, painting and games all going on.

Jon continues his undead winning streak, beating both Jason's Ogres and Amy's Dwarfs. He did not realize just how strong DE 6 was for both his werewolves (from 2 individuals to a troop of 3) and his wraiths, now backed up by a regiment of skeletons and a horde of zombies. I think the next month we need to see him play against Kara's Basileans and Rusty's Kingdom's of Men to give him more of a challenge.

Jon rolls his attack while Jim watches intently. Eric and Donny move to set up their game in the background on the left, while Jason watches, and Kara and Alex talk to Keith while he paints) 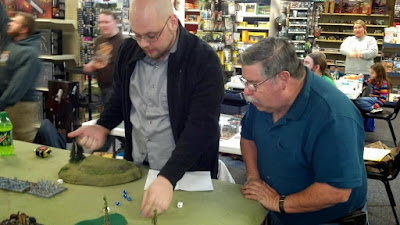 The wraiths flank the dwarfs, while the werewolves attack to the front. Not a good day for the stunties! 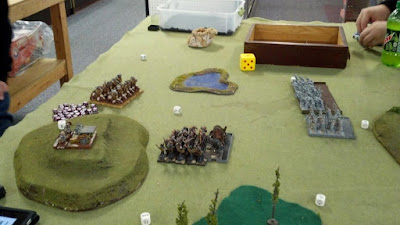 Donny also showed the power of the Ogres, beating both Eric's Romans (Kingdoms of Men, who are looking really nice) and Amy's Dwarfs (ouch - two losses for the month back to back).

Donny looks at his attack roll while, which Eric is not as happy with while Jon looks on 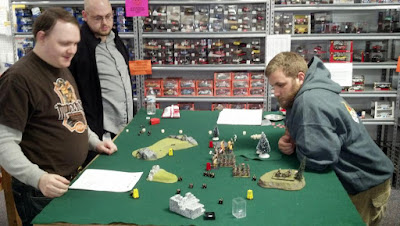 Jon, Jim, Jason, Keith, Alex and Kara - and I managed to have not a one of them actually looking at the camera. 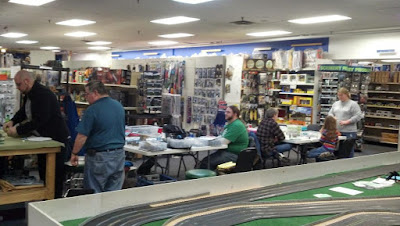 But that wasn't all - I was able to demo DeadZone with Jim - and the enforcers easily beat the plague back (though I did finally manage to take one of those pesky enforcers down with me). 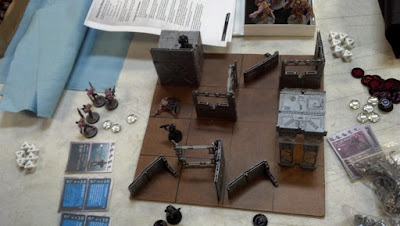 My test DeadZone demo board after the demo - one suppressed plague as left, and two enforcers. Jim is now even more excited about his kickstarter shipment (though a tiny bit frustrated that he got a notification last week but still hasn't actually gotten his big box-o-toys!).