December 17, 2013
This was a bit of a quiet week. Initially there were only four people there, but then four more showed up a bit late.

The biggest thing was showing of DeadZone. People were quite impressed with everything that came with the game, especially the gaming mat.

Three games for the league were played - My Basileans beat Jason's dwarfs, then my goblins fell to Jim's Dwarfs, and my Ogres fell to Jim's goblins (building three armies makes for a lot of games each month!)

The night ended with Eric helping me build the terrain for the training day scenario and running him through the demo. He played as the plague, and found it simply very difficult for his 3A's to get through the enforcers armor, so he lost 1 vp to 3.

Deadzone, in all it's retail goodness 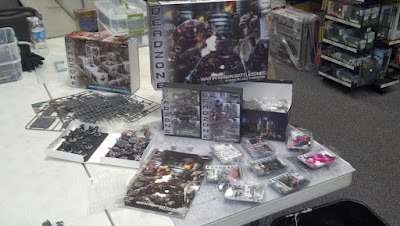 Demo being played on the full mat - seems so tiny. 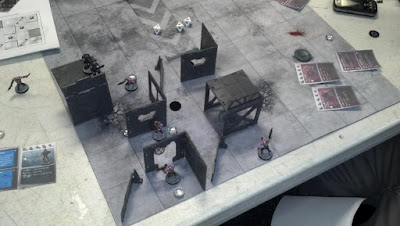 Eric checking out the Rebs while we play through the demo