November 04, 2013
Well, thanks to everyone in the league and at The Hobby Shop, we had a great opening night. We had 10 people show up, got in 7 games of Kings of War (and 1 of Dreadball) and just had a great time.

The evening started with Jason's Dwarfs soundly beating my Goblins. I thought the fleabag riders could take his troop of IronWatch, but when they failed to route them, their flank was exposed to his berserkers, who ate them for lunch, and then had no problem dealing with the sharpsticks who couldn't do anything to the Ironclad.

Rusty's Kingdoms of Men army then put the smack down on Amy's Dwarfs, not leaving a beard left to be found on the battlefield. 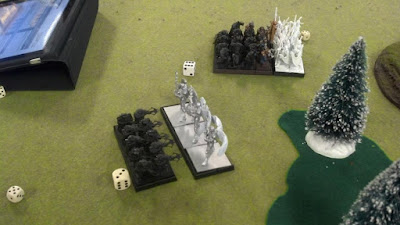 Kara's Basileans played against Josh's Elves - so it was Angels v Drakon riders. A very close battle, but in the end Kara took the victory. 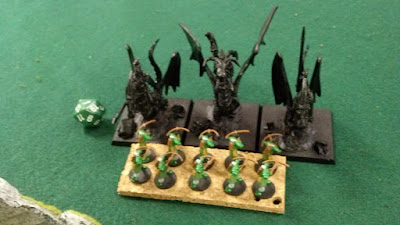 Amy then pitted her Dwarfs against my Ogres (yes, I have three armies). She thought she was in bad shape when my Red Goblin Blaster blew up her unit of IronClad for 7 wounds, but it wasn't enough to faze the stalwart dwarfs. They came around to defend the Ironwatch against the regiment of Ogres, but the Ogres made short work of them. But that didn't stop the Ironwatch from unleashing a hail of crossbow bolts and destroying the Ogres, securing the win for Amy.

Rusty then went against Jason, and showed that the men are a tough list to beat. 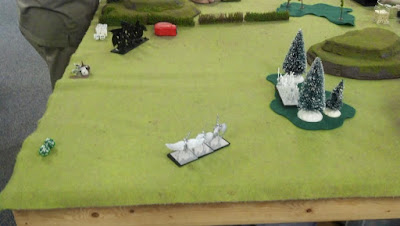 Kara fought Amy, and the stalwart dwarves held their own for a while, after Kara rolled 1-1 for their nerve test from the charge with the Elohi. The dwarves fought back, managing to make the angels waver three times, but then when they finally passed the nerve test it was the end of the dwarves, and Kara ended the night 2-0. 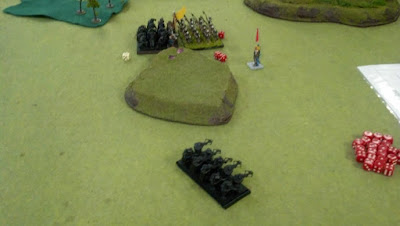 The last battle was Josh against Beth and her Kingdoms of Men army, and while a close game, the Drakon riders made the difference in a victory for Josh. 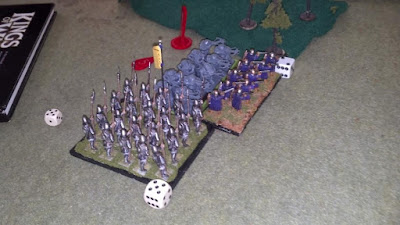 Meanwhile, Keith was teaching Alex to play DreadBall. The game went back and forth, and in the end it was called with a tie because they didn't have time to go into overtime.

So a lot of fun was had. A lot of armies are shaping up quite nicely (yes, I did purposefully avoid having to play the Drakon riders with my goblins - at this point value I already knew how that would end up). I hope everyone is having as much fun with this as I am, and I look forward to seeing everybody next week!