November 19, 2013
I get to the store right at 6, and what do I find but Jason is playing Dreadball against a friend! A great way to start off another successful league week. Not as many people showed up - a total of 7, but four people have their 250 pts painted already, and five more games were played.

In a match to see which were better, Drakon Riders or Elohi, my Basileans took advantage of their stronger defense and regeneration to defeat Josh's elves. Then to keep me humble, Jon (my son) took his Undead and slaughtered my goblins. Jason's dwarfs defeated Eric's roman legions (Kingdoms of Men), and then he followed that up by also beating my Ogres. Then Jon played against Eric's romans, also beating him (it helped that while he had a very small model count for his undead (5 wraiths and 2 single werewolves), everything in his force was DE 6!)

I took some pictures of all the competed units so far, and have updated the web site ( http://www.puggimer.net/kowleague.htm ) to add a page for each player, listing all their battles and pictures of their completed units.

Then to top off the evening, I did a quick demo of Dreadball with Josh. I had not realized that as big of a fan of Mantic games that he was, he had yet to try Dreadball.

So one more 250 point week, and then we escalate! 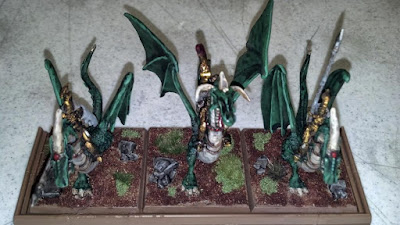 Kara finished a troop of Elohi and a troop of Men at Arms for her Basileans (amazing she came up with the exact same 250 pt list as I did :-) ) 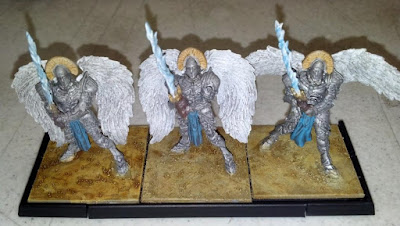 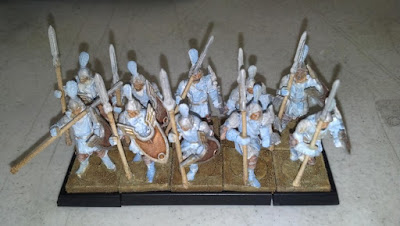