November 15, 2013
So finished assembling the minis, thought I would share. It sometimes amazes me how different light changes things - though in these pictures they appear blue, they are actually grey.

First the enforcers - they do look pretty good. The captain's pose is a little static to me, though I do like the plain trooper who actually looks like he is using his jump pack The plague are just cool for monsters. Again the A1 is HUGE, though also a little static of a pose. The three 2A's are all great poses. I don't know which I like better, the one who looks like he just needs a hug, the one hunched over catching his breath, or the one jumping over the wall. I had to repose him a bit as the support beam appeared to fit on his right, but that had it facing front so not holding him up. Of course it was strongly set, so I cut it and put it on the other side. He is also the only mini I felt I needed to pin - since he is connected to the wall only via his hand. Then of course you have the two plague dogs, one of which just wants a treat. I don't know why these are the bad guys, they all just want some love. 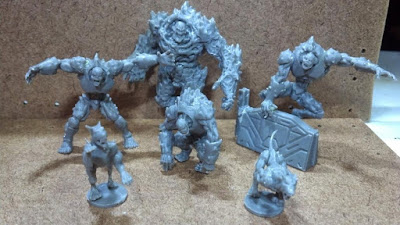 Finally everything in one shot just to show the scale. The A1 is nearly twice the size of the captain. 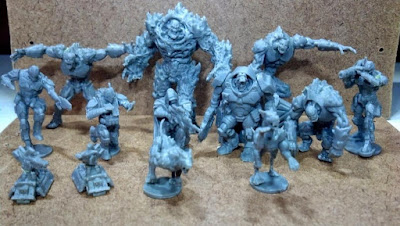 So next is to start painting. First a base of silver on the enforcers - after all they are all in armor. I'll look to pink up a can of pink spray tomorrow to hit the plague with - that will save a bit of time as well.

I also want to look for some cool bases for these as these didn't come with any (though they will in the full shipment). A FLGS that I'm doing Kings of War demos at on Sunday has some of the Secret Weapon bases so I'll take a look while I'm there. This is actually my first sci-fi based game (I'm more of a fantasy person), so going with tech bases vs. the standard mud and grass I usually do is a bit different.