November 15, 2013
So today I got my DeadZone: Training Day minis. These are production DeadZone minis being sent out to Pathfinders to get painted and ready for the release of the game next month. There will be a special demo scenario to introduce the game, since the whole game is a bit too big to do as a demo.

I plan on blogging fully about these in preparation for the day. So today I got the minis for the demo

First up - the plague. 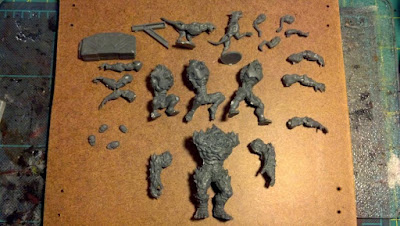 Wow. The 1A is HUGE! 50% bigger than KoW ogres or angels or trolls. Very little flash, nor are there a lot of mold lines. They were very easy to clean up and put together. I was a bit surprised that the heads were keyed to specific necks, though I expected the arms to be specifically fit to the bodies. Even with this it would be easy enough to convert these if you wanted to. The hounds were actually the trickiest to assemble, and that wasn't much at all. 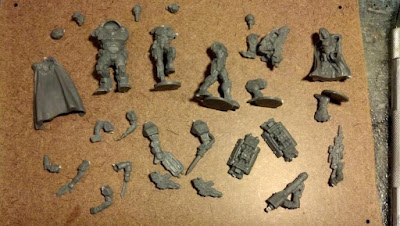 These are a bit more confusing. When I first opened the bag there where four enforcers, but as I sorted through the pieces, I found that there were actually five enforcers - one of which has both legs separate. Much like the plague, these are specifically keyed so they aren't hard to assemble, once you find the correct pieces. There were a few pieces however that I could not figure out until I went to the web site and realized they were sentry guns.