October 21, 2013
So I printed out a few copies of the preliminary league rules, and packed a few of my Kings of War armies and my copy of DreadBall and head to the Hobby Shop to see if anyone comes to sign up.

Well not many new people came, but 8 of the 9 people (not including me) that were signed up showed up.

So we played a couple of game, and I very quickly regretted only bringing 5 of my 8 armies, as we could have had 2 more games going on. As it was, Keith helped show Rusty how to play against his (Keith’s) daughter Alex – and yes, I put in a line in the rules about not swearing even when getting mercilessly beaten by a 9 year old girl – because that is what happened. 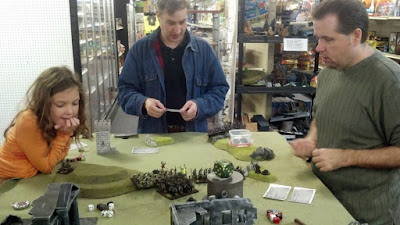 Alex uses the undead to mercilessly beats Rusty, who Keith (in the middle) his teaching to play his first game. The rules packet specifically states that there is no swearing, even when getting beaten by a nine year old girl.

At the same time, Josh (@redfox4242 - who drove almost an hour and a half to come and play!) played a game against Amy. He was slightly ahead, but if you look at the table in the picture you can see the orcs are just about to crush his elves. Beth spent her time between watching the games and working on her Kingdoms of Men army (she got a deal on closeout Arcane Legions figures, and will be using those (even if they are a little small)). 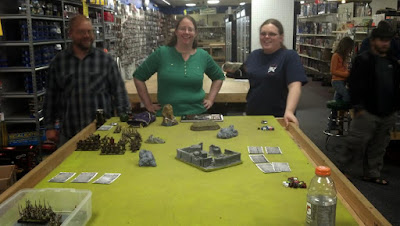 Josh, Beth and Amy pose for a picture after a very close draw - Amy's orcs just needed one more turn and they would have completely crushed the elves.

Meanwhile Jon (my oldest son) is going through the Kings of War hardback army list to decide what to order for this undead army. I take the opportunity to demo Dreadball with Kara – and my goblin jack fumbles the ball sending the game into overtime – which her striker then stands up, grabs, and immediately scores for three points winning her the demo as the crowd goes wild.

Eric sees up having so much fun, he signed up for the league himself, though he did say he didn’t want to be eligible for prizes, being a store employee and all.

So it was a great, fun evening for everyone, and the league hasn’t even officially started yet.

Me, I still need to decide between Goblins, Ogres and Basileans for the league. Decisions, Decisions.

Because it is all fun and games . . .
Reactions:
#ManticBlog