October 11, 2013
We have several groups in Ohio that are attempting to turn simple Warhammer tournaments into mini-conventions with multiple tournaments and other events. One of these is the (hopefully first annual) Legendary Game Faire in Fairborn Ohio.

Unfortunately there was a last minute conflict with the hotel it was to be held at, so at least one event was cancelled and it was moved to a local store. However I'm not going to let that stop me, so I still showed up tonight to do some demos. The few people that were there tonight though were mostly for the character battle tournament, but I did get in a demo of Kings of War and Dreadball.

The Kings of War demo was Abyssal Dwarfs v. Dwarfs. This really showed off the power of artillery, as the first turn cannons took out the abyssal half breeds, then on turn two they took out the Less Obsidian Golems. Then the AD artillery started hitting back, as well as the dragon fire team and decimators. It looked like the dwarfs were doing ok before turn 5, then on turn 5 their three blocks of infantry all routed and were gone. At the end of turn 6 only the two dwarf characters were left.

The Dreadball demo went fast and furious, with the Orx guards putting the smackdown on the corporate striker, so their next rush enabled a jack to get in and score. On the last corporate rush a desperate came close, but the striker in the 3 point strike zone caved under the pressure and fumbled the ball to end the game.

A lot of fun, and I hope to get several more demos in tomorrow night. I would like to try and get the players to convert their WFB lists into KoW lists and give the game a try.

Lots of dwarfs prepare to fight their abyssal cousins 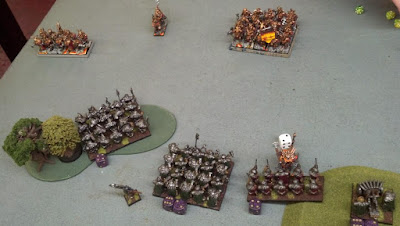 and a round or so later, not so many dwarfs are left after the artillery gets through with them 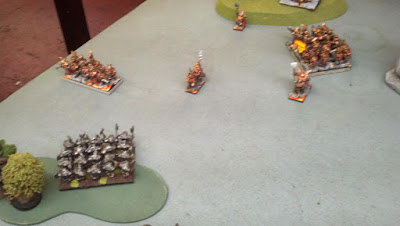 @TheArmoredRock having a great time kicking my butt. His painted death angels made from convert Elohi are beautiful (he is using them as Vargheists for his VC army. 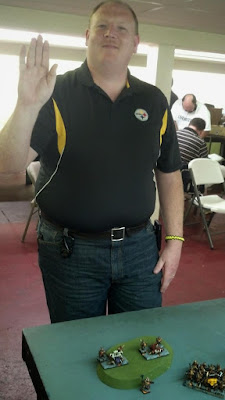 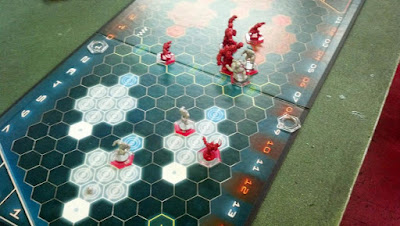