Mantic Forum: Out of the Abyss

September 02, 2012
I've always been a supporter of the free market, competition and capitalism. So at GenCon 2011 I decided to put my money where my mouth is and picked an Abyssal Dwarf army box & War Conclave (I've been playing WFB for a long time, and am currently working on my 5th army (drunk dwarfs, to be displayed with cold home brewed beer on tap (where allowed)). I put them together and they sat in the box. So this year I picked up a second army box, a box of halfbreeds and two mortars, as well as some orcs to use as slaves (since they didn't have the slave orc box).

With KoW having a tournament at Adepticon in April, I said I would have them ready (yes, so I now have two armies to get ready by then - I never said I was all that smart :-) ). Of course, half way through assembling the new models I decided to rebase the entire army, especially since I wasn't doing any real conversions with it (with a little over seven months I'm feeling the pressure, because I'm not all that fast of a painter).

Anyway, I FINALLY finished rebasing and assembling everything yesterday, so I figured I'd share a bit about it.

Oh, and I've yet to actually play a game, but then I figure if WFB is any indication, then that isn't a factor (yeah, my dice don't hate me, they loathe and despise me).

So to get it started, here is my army 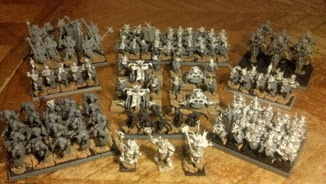 Actually right now my planned list does not have the slave orcs or gargoyles in it. I have some non-mantic models - the gargoyles are old mage knight figures I'll repaint, and the lesser obsidian golems are Confrontation earth elementals that already painted, so 6 of the 112 figures are almost done.

Next up, prime/undercoat the whole thing (I need some more flat black primer), then start working on these when I'm not working on my WFB dwarfs.
Abyssal Dwarfs Kings of War