From the other side pt 2

March 17, 2015
(In which our intrepid blogger continues his ramblings, despite the size limits imposed upon him by THE MAN!)

Now one of the problems you encounter running events at conventions is space.  While they are good about table space for games - no so much for things like your laptop, paperwork, etc.  Plus it is a bit of a challenge carting everything around when needed.

A couple of years ago, I decided to play WFB army themed around Drunk Dwarfs, and figured I'd put in a tap to a home brewed keg of beer into the display - all on a cart.  The idea came from seeing the fantastic displays created by Brandon Palmer (@GMMStudios on twitter) GMMStudios (Seriously, check out his stuff.  It is just amazing.  Ok, I did try to compete with him, but I was just kidding myself.  Even with fresh beer on tap as a gimmick I really never stood a chance), specifically his cart that he used for his Monty Python Ogres.  Go check his stuff out, I'll wait here.

oh, you'r back?  Good!  Back to my meager ramblings.

So I put together a cart out of PVC pipes, plywood, and the cool fittings from FORMUFIT to connect everything together.  After it debuted at Adepticon, I realized that just by replacing the top (the dwarven brewery with the beer tap on back) I could make a cart usable at Origins and Gencon (where I couldn't bring beer anyway).

Last year I made a frame for a Kings of War poster, and also picked up a big Post-It board / dry erase board - which is very nice to track event information during a convention / demos / tournament. 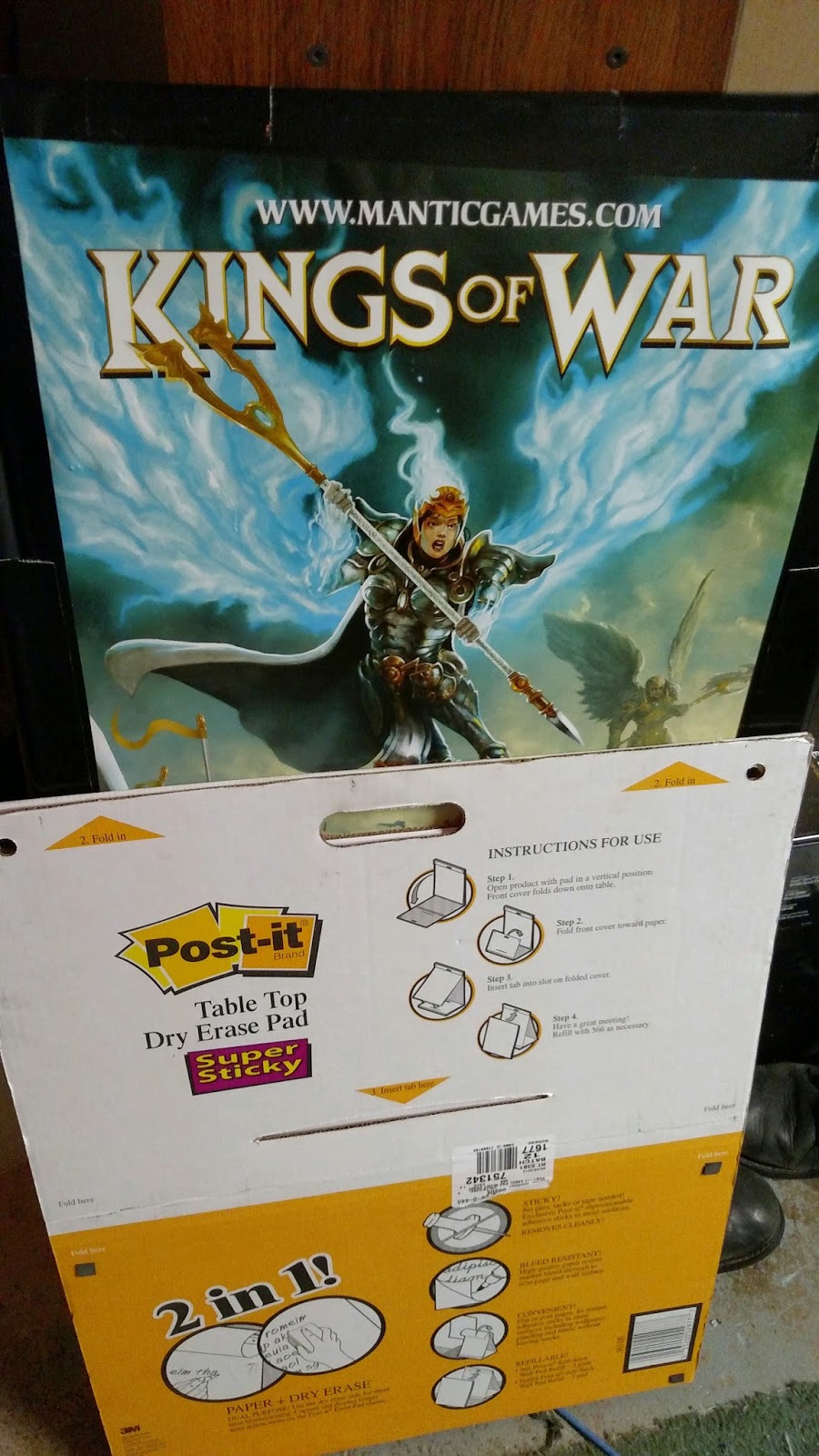 The nice thing is since the cart is made of PVC, it comes completely apart for easy transportation. 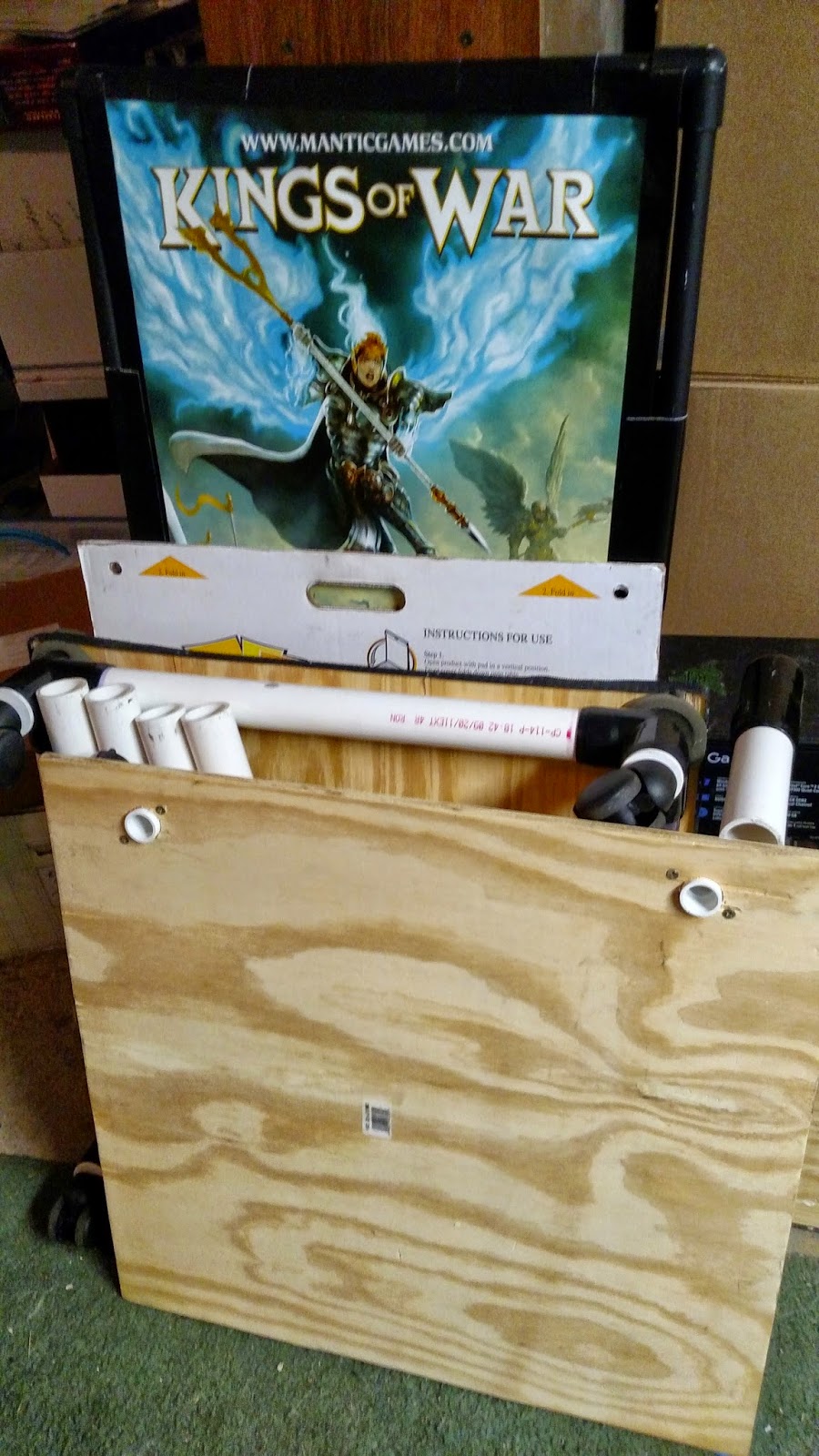 And then when I put it together, I can both transport some of my stuff, as well as have a place to set up my laptop during tournaments. (All twelve of my army boxes are in the bottom) 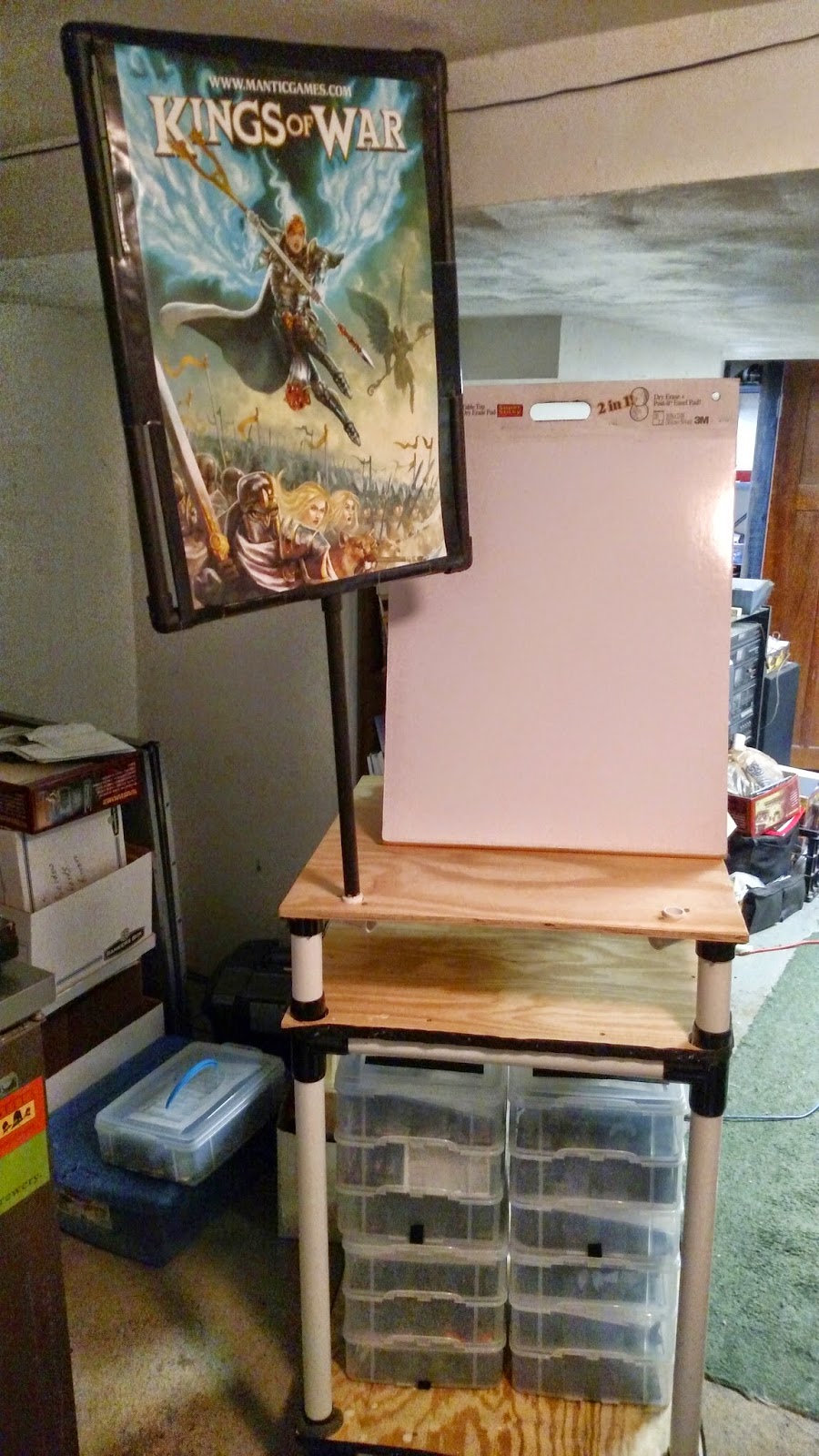 With the addition of a few bungie cords, I can have everything on two wheeled 'carts' so to speak. 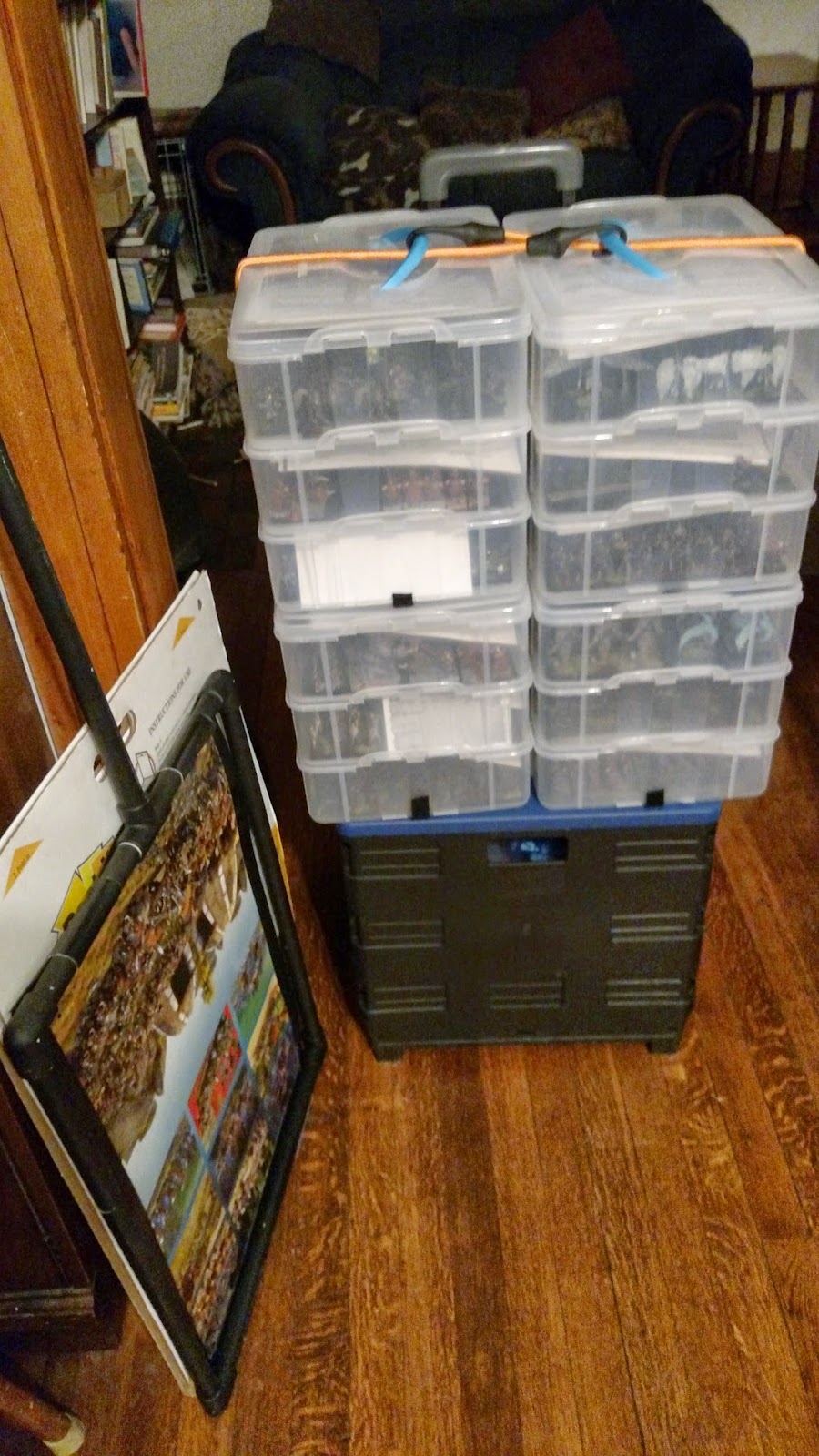 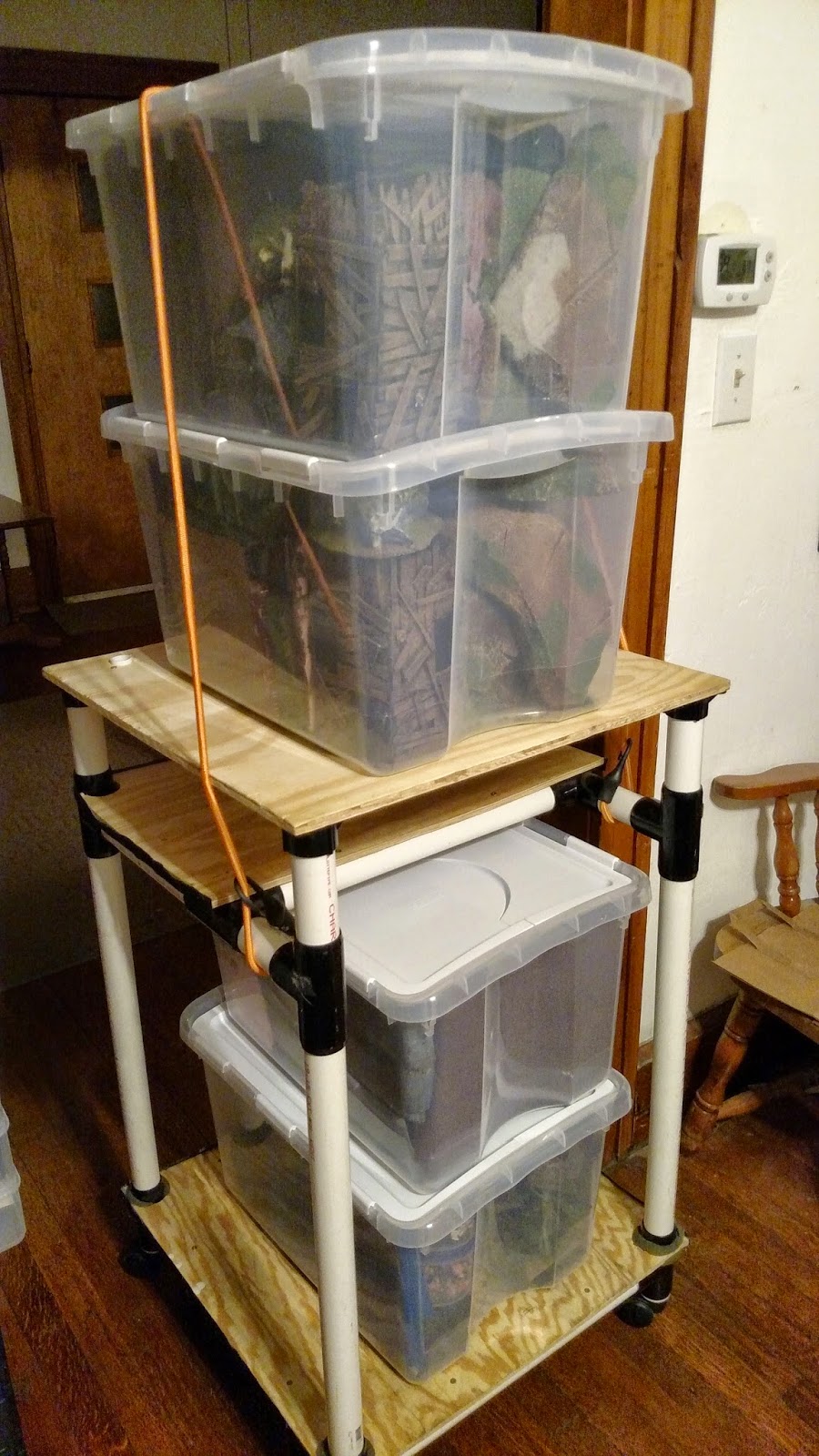 Now the challenge comes tomorrow morning when I get to play a 'fun' game of adult tetris trying to fit all of this stuff, plus armies for two people and suitcases for all three of us, plus the three of us that are riding up in my Mercury Mariner.  When it was going to be four people I had planned on renting a van, but I'm hoping I can fit it all. (without making my son hold a crate on his lap the entire way :-) ).
conventions Kings of War